The Vinci Group is the world's second largest concession and construction company. It reports a strong presence in more than 100 countries around the world. Moreover, the company's activity improved significantly in 2021, after being penalised by the Covid-19 health crisis in the previous year. Find out more about the group's annual results for 2021 and its current market capitalisation here.

Trade the Vinci share!
79% of retail CFD accounts lose money. You should consider whether you can afford to take the high risk of losing your money. This is an advert for trading CFDs on eToro 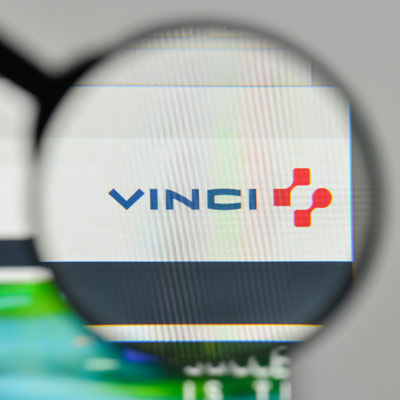 For the full twelve months of its 2021 financial year, the Vinci group generated consolidated revenue of €49.4 billion, compared with €43.2 billion in 2020. This represents an increase of 14.3% (on an actual basis) compared with the previous year.

On a like-for-like basis, the company's annual turnover is up 12.9%, after the impact of changes in the scope of consolidation (+1.2%) and exchange rate fluctuations (0.2%). International sales accounted for 47% of the total.

Breakdown of turnover by group activity

Vinci Energies' turnover for the financial year 2021 reached €15.1 billion. It increased by 10% compared to 2019. In France (representing 44% of the total), revenues from this business line are estimated at €6.7 billion, up 9% over two years.

Internationally (accounting for 56% of the total), the branch's revenue is estimated at €8.4 billion in 2021. It reports 11% growth over 2019. The division's revenues have increased, particularly in Europe, Africa and North America.

For its part, the Vinci Immobilier division achieved revenues of €1.6 billion for the 2021 financial year. Compared to the year 2019, it increased by 11%. This growth is explained by the excellent level of production noted in the commercial property and residential sectors.

Internationally (51% of the total), the Vinci Construction division generated revenues estimated at €13.5 billion. They increased by 16% compared to their level in 2019. This fine performance was boosted by the good momentum noted in rail, road and earthworks.

Vinci's financial structure at the end of 2021

At 31 December 2021, free cash flow amounted to €5.3 billion, compared with €4.0 billion at the same date the previous year. 4.0 billion at the same time last year. It thus reached a record level at the end of the 2021 financial year. This healthy performance also reflects a strong improvement in working capital requirements and current provisions.

At the end of 2021, the company has a gross financial debt of €28.6 billion, compared to approximately €28 billion at 31 December 2020. This was determined before taking into account available cash. Its average maturity is 7.3 years, compared with 7.7 years at the end of the previous year. The average cost of debt decreased slightly to 2.1% from 2.3% a year earlier.

About the Vinci Group's dividend and market capitalisation

On 12 April 2022, the company's General Meeting of Shareholders was held. During this meeting, Vinci's Board of Directors proposed the payment of a dividend of €2.90 per share for the financial year 2021.

In addition, the company is present on the equity markets. It belongs to the CAC 40 stock market index. In June 2022, Vinci's market capitalisation is estimated to be around EUR 50 billion.