The year 2020 was a special year for the banking sector. This is also the case in several other sectors of activity. Indeed, it was marked by the Covid-19 health crisis which disrupted the smooth running of economic activities. The impact of the coronavirus pandemic on the performance of the Unicredit banking group in the 2020 financial year was also felt. Considered one of the largest banks in Italy, it was strongly affected by the epidemic. In this article we take a look at the company's annual results.

Trade the UniCredit share!
77% of retail CFD accounts lose money. You should consider whether you can afford to take the high risk of losing your money. This is an advert for trading CFDs on Plus500 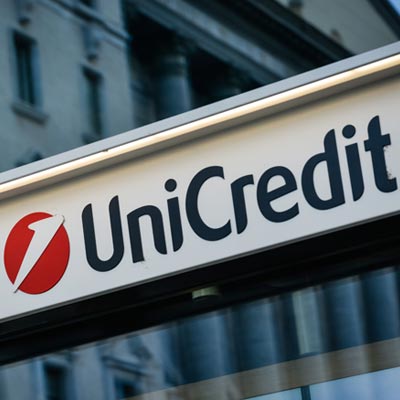 Unicredit's turnover and net profit in 2020

In the twelve months of the financial year 2020, the Unicredit banking group generated revenues of €17.1 billion, compared to €18.83 billion in the previous year. 18.83 billion in the previous financial year, a year-on-year decline of 9%. The main reason for the drop in turnover is the effect of the health crisis on the company's business during this year.

In the fourth quarter of 2020, the Italian banking giant's turnover reached 4.23 billion euros, down 12.6% year-on-year. On the other hand, the company achieved a good annual performance in terms of net profit. 1.3 billion at the end of December 2020.

This result exceeded the group's forecast of 800 million euros. This good performance was driven in particular by the good control of the company's costs. For its part, the CET1 hard equity ratio increased to 15.4% at 31 December 2020. A year earlier, it had stood at 13.22%.

In fact, this indicator is a parameter that measures the company's capacity to face possible crises.

As a result of the Covid-19 health crisis, the Unicredit Group saw its accounts plunge into the red in the fourth quarter of 2020. In the last three months of this year, the bank posted a net loss of €1.17 billion. This was larger than the market had expected.

The market was expecting a loss of 774 million euros for the quarter. Furthermore, the company ended the year 2020 with its accounts in the red. For the year as a whole, it made a net loss of 2.78 billion euros. This was in a difficult economic context marked by the coronavirus epidemic.

This result is worse than the market expected. For its part, it was aiming for a loss of 2.01 billion euros in the 2020 financial year. Also, the group's performance this year was penalised by a provision of 5 billion euros. This was made as part of the adjustment of receivables to deal effectively with the economic impact of the health crisis.

The announcement of Jean-Pierre Mustier's departure, a highlight of the 2020 financial year

The 2020 annual results unveiled by the Unicredit Group were the last to be presented by its now ex-CEO Jean-Pierre Mustier. The announcement of the French banker's resignation from his post was one of the highlights of the year. The man had been at the helm of the company since 2016.

Indeed, in November 2020, he announced his intention to leave his post in 2021. This decision was the result of differences between the man and the company's Board of Directors. In fact, the two parties had different views on the strategy to be pursued.

Among the subjects concerned was the offer made by the Italian government to Unicredit to acquire the BMPS bank. As a reminder, in 2017, the latter had benefited from a public rescue. Jean-Pierre Mustier did not comment publicly on this case.

However, the banker had repeatedly stated that his strategy between now and 2023 did not include any potential acquisitions. Instead, he gave priority to the further transformation of the company. Furthermore, with the agreement of the bank's Board of Directors, Mustier's departure date was set for 11 February 2021.

To replace the Frenchman, Unicredit's Board of Directors has chosen the Italian banker Andrea Orcel, the bank's current CEO. While waiting for him to take office, the company had appointed Ranieri de Marchis to act as interim CEO of the company.

Unicredit's dividend and market capitalisation in 2020

At Unicredit Group, the detachment of the dividend is usually carried out once a year in the month of April. This coupon has been distributed continuously to the company's shareholders for the past three years. For the 2020 financial year, the company has decided to pay an amount of 0.12 euro per share.

Like many Italian companies, Unicredit is also present in the equity markets. The company is listed on the Milan stock exchange. It is also included in the FTSE MIB stock market index. In 2020 (as of February), the group had a market capitalisation of 31.057 billion euros.

About the Unicredit Group

Founded in 1998 and headquartered in Milan, Unicredit is an Italian company specialising in the banking sector. It is the second largest bank in Italy, behind Intesa San Paolo. The company is also one of the leading European banking groups.

In order to better serve its customers, the group has divided its activities into three divisions according to their turnover. Firstly, there are the commercial banking activities. They represent 54.7% of the company's turnover.

Secondly, there are the corporate, investment, finance and market banking activities. These represent 15.8% of the group's turnover. They include factoring, securities transactions, stock market intermediation, leasing, and interventions in the interest rate, foreign exchange, equity and derivatives markets.

Finally, the Unicredit group's last business area is asset management. It represents 6.2% of the bank's turnover. In addition, the company has a network of over 8,900 branches worldwide.

It markets its products and services through this network. The group has more than 140,000 employees serving its customers.

Trade the UniCredit share!
77% of retail CFD accounts lose money. You should consider whether you can afford to take the high risk of losing your money. This is an advert for trading CFDs on Plus500