The Thales Group is one of the European leaders in the manufacture and marketing of electronic equipment and systems. These are intended for several sectors including aerospace, transport, defence and security. In addition, the coronavirus health crisis impacted the company's business in 2020. Discover here the annual results for the year 2020.

Trade Thales shares!
79% of retail CFD accounts lose money. You should consider whether you can afford to take the high risk of losing your money. This is an advert for trading CFDs on eToro 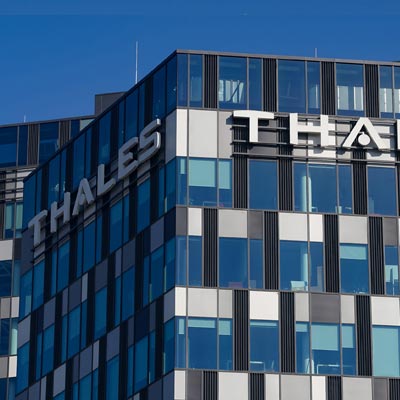 For the full twelve months of fiscal year 2020, Thales generated revenues of €16,989 million, compared to €18,401 million in 2019. It declined by 7.7% year-on-year. At constant scope and exchange rates, this turnover is down 10.4% year-on-year. This decline is due in particular to the sharp drop in demand in the civil aeronautics sector.

It is also explained by the numerous disruptions that affected operations in all of the company's activities. From a geographical point of view, the decline in turnover was marked in emerging markets, which saw a 20.3% drop (in organic terms) over the year 2020.

This illustrates the anticipated phasing effects on certain large contracts (particularly in transport), after several years of strong growth. In mature markets, the group's activity fell by 6.2% (organic). This was despite the impact of the decline in the civil aeronautics business in France.

Revenue breakdown by business segment in 2020

In 2020, the Aeronautics sector generated revenues of €4,217 million, down 24.6% on the previous year. On a like-for-like basis, the fall was 24.1%. This decline is due to the impact of the Covid-19 health crisis, which caused delays in tenders in the space sector.

1,618 million, down 15.3% year-on-year. On a like-for-like basis, it fell by 13.9%. This decline was caused by the phasing effects on large urban rail signalling contracts, notably in London and Doha (Qatar). It was also due to delays in signing contracts as a result of the coronavirus pandemic.

2,992 million, down 5.9% (like-for-like) year-on-year. This decline reflects the negative impact of the pandemic on passport demand from Q2-2020 onwards and on IoT connection modules in the same quarter.

About order intake and backlog in 2020

14,910 million, up 3% (at constant scope and exchange rates). This performance was driven by the signing of 12 major military contracts in five countries. In addition, the Aerospace segment recorded order intake of € 3,822 million. 6.6 billion at the end of December 2020, down 10%.

The Digital Identity & Security segment recorded an order intake of €3,023 million. It should be noted that the majority of the business in this segment is conducted over short periods of time. Therefore, its backlog is not significant.

The General Meeting of Thales Group shareholders was held on 6 May 2021. During this meeting, the Board of Directors proposed a dividend of €1.76 per share for the 2020 financial year.

The company is also present on the stock markets. The Thales share is listed on the Paris Stock Exchange on the Euronext market. As of October 2021, its market capitalisation was estimated at EUR 17.85 billion.