Scor is a French company active in the field of reinsurance. It is recognised as one of the leading reinsurers in the world. In addition, during the year 2020, the group's activity was affected by the coronavirus health crisis. This has not been without consequences on its financial performance. Discover here Scor's 2020 annual results as well as those of the first three quarters of the 2021 financial year.

Trade the Scor share!
77% of retail CFD accounts lose money. You should consider whether you can afford to take the high risk of losing your money. This is an advert for trading CFDs on Plus500 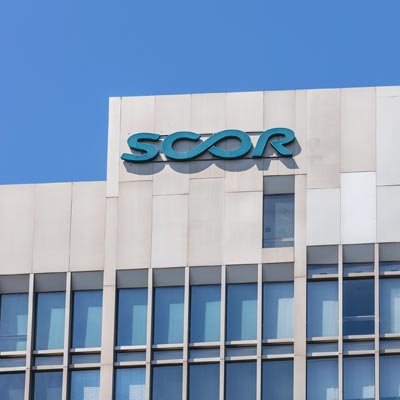 Performance of financial indicators in 2020

It was thus 327 basis points above the risk-free rate. At the end of December 2020, the group had a gearing ratio of 28.5%. This was an increase of 2.1% points compared to the previous year. This increase was driven by the fall in the level of equity. The latter is impacted by exchange rate developments.

At the end of December 2020, the estimated solvency ratio of the group reached 220%. This corresponds to the upper limit of the optimal solvency zone between 185% and 220%, as indicated in the "Quantum Leap" strategic plan.

Strong results in the first half of 2021

Despite the continued impact of the coronavirus epidemic, the Scor Group delivered a strong financial performance in the first half of 2021. This was mainly driven by strong business growth in property and casualty reinsurance.

Update on the Group's activity in the third quarter of 2021

In the third quarter of 2021, the Scor Group recorded a net loss of EUR 41 million, compared to a net profit of EUR 109 million in Q3-2020. The company's results were hit by major natural disasters. These included flooding in Europe and Hurricane Ida.

According to the group, these two claims represent a total charge of 343 million euros (net of retrocession and before tax) in Q3-2021. Between July and September 2021, gross written premiums, equivalent to turnover, amounted to 4.61 billion euros, compared to 4.09 billion euros in Q3-2020.

At the end of the quarter under review, the group's estimated solvency ratio stood at 225%. It thus exceeds the optimal solvency zone indicated in Scor's Quantum Leap plan, which is a range of 185% to 220%. In addition, the French reinsurer has launched a share buyback plan.

It is estimated at 200 million euros. The implementation of this plan started on 28 October 2021 and should be completed by the end of March 2022.

About Scor's dividend and market capitalisation

The Scor Group is one of the companies that distribute a coupon to its shareholders at the end of each fiscal year. For example, the company has decided to pay a dividend of EUR 1.80 per share for the financial year 2020.

In addition, the Scor share is very popular with investors on the financial markets. Indeed, the company is listed on the Euronext market of the Paris Stock Exchange. At the beginning of 2022, the company had a market capitalisation of more than EUR 5 billion.

Trade the Scor share!
77% of retail CFD accounts lose money. You should consider whether you can afford to take the high risk of losing your money. This is an advert for trading CFDs on Plus500