Schneider Electric is a French company specialising in digital energy and automation solutions for energy efficiency and sustainability. It is recognised as the world leader in this sector. The group is present in more than 100 countries worldwide. In 2020, its business was affected by the adverse effects of the Covid-19 health crisis. However, the company took advantage of the global economic recovery to improve its results in 2021.

Trade the Schneider Electric share!
79% of retail CFD accounts lose money. You should consider whether you can afford to take the high risk of losing your money. This is an advert for trading CFDs on eToro 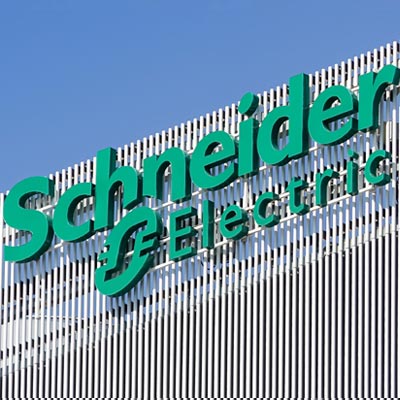 In fiscal 2020, Schneider Electric's business was disrupted by the coronavirus pandemic. However, it recovered towards the end of the year. This allowed the group to report better-than-expected results for the year as a whole.

Over the twelve months of the 2020 financial year, the electrical equipment manufacturer achieved an annual turnover of €25.16 billion. It reported a 7.4% drop (in published data). In organic terms, the fall was 4.7%. However, this performance exceeded the company's expectations.

The company had expected an organic decline in sales of between 5% and 7%. In the fourth quarter alone, the company's turnover amounted to 7.13 billion euros, an organic increase of 0.8% year-on-year. This development was driven in particular by the good dynamics of the group's activity in Western Europe and Asia-Pacific.

Also, the organic growth in turnover over the last three months of the year was helped by price increases. This was achieved in a difficult context marked by a persistent health crisis. In addition, Schneider Electric recorded a net profit of 2.13 billion euros for the year 2020.

Results in the first quarter of 2021

In the first quarter of 2021, the Covid-19 health crisis continued to plague several countries around the world with numerous new cases of contamination. On the other hand, difficulties in supply chains continued. It is in this context that Schneider Electric unveiled its quarterly results.

In the first three months of the financial year 2021, the group's turnover amounted to 6.53 billion euros. On a year-on-year basis, it increased by 11.9% on a reported basis. On an organic basis, turnover increased by 13.5%. This strong performance was driven by business growth in all regions during the quarter.

In more detail, the Energy Management division's revenues reached EUR 4.95 billion in Q1-2021. Year-on-year, they increased by 12.9% on a reported basis and by 13.7% on an organic basis. The industrial automation division posted sales of EUR 1.58 billion in the quarter.

1.58 billion. Compared to the same period of the previous year, this represents an increase of 9 % on a reported basis. On an organic basis, the division's sales rose by 12.9% year-on-year.

Half-year results in the first half of 2021

In the first half of 2021, Schneider Electric achieved a record financial performance. This was due in part to the strong recovery and momentum in the group's various markets. For the first six months of this year, the company's half-year sales reached €13.77 billion, up 19% year-on-year (reported).

On an organic basis, sales grew by 18.7% compared to the same period last year. Between January and June, the electrical equipment manufacturer posted a net profit of €1.56 billion, compared with €775 million in H1-2020. It has therefore doubled over one year. The group's adjusted Ebitda for the first half of the year was €2.36 billion.

In the third quarter of 2021, Schneider Electric reported quarterly revenue of €7.22 billion. It reported year-on-year growth of 11.8% on a reported basis. On an organic basis, sales rose by 8.8%. This sales development was supported by the price measures implemented throughout the year in the Products division.

In the first nine months of the financial year 2021, the group's turnover reached 21 billion euros. 21 billion. On a reported basis, it increased by 16.4% year-on-year. On an organic basis, sales rose by 15.1%.

Schneider Electric's Annual General Meeting of Shareholders was held on 28 April 2021. During this meeting, the company announced its intention to pay a dividend of €2.60 per share for the year 2020. This is an increase of 2% compared to the coupon distributed for the 2019 financial year.

Schneider Electric also has a remarkable presence on the financial markets. Indeed, the company is listed on the Paris Stock Exchange on the Euronext market. It is also included in the CAC 40 stock market index. In January 2022, its market capitalisation is estimated at more than 80 billion euros.