The Renault group is the European leader in the electric car market. It is the third largest car manufacturer in the world. The company has formed an alliance with Nissan and Mitsubishi Motors. It is present in more than 130 countries and has more than 180,000 employees worldwide. In 2020, the company's business suffered a huge drop due to the Covid-19 pandemic. Here are the key takeaways from the figures recorded in FY2020.

Trade the Renault share!
77% of retail CFD accounts lose money. You should consider whether you can afford to take the high risk of losing your money. This is an advert for trading CFDs on Plus500 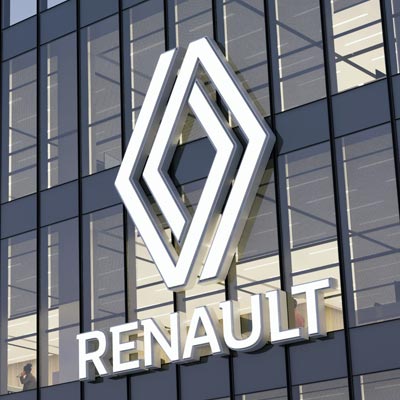 Business impacted by the health crisis and component shortage

Several events marked the Renault group's 2020 financial year. The Covid-19 health crisis was one of the key events that disrupted business in several countries around the world. It had a heavy impact on the financial performance of many companies during the year.

The Renault group has not been spared this reality. The Covid-19 pandemic severely disrupted the company's business in 2020. The company was also penalised by the global shortage of electronic components that affected the entire automotive industry during the year.

However, the car manufacturer has made the necessary efforts to limit the effects of this shortage on production as much as possible.

The first half of 2020 is the part of the year that was significantly affected by the Covid-19 health crisis. After recording mixed results during this period, the Renault group was able to significantly improve its performance in the second half of the year under review.

This is the result of the many efforts made by the company to turn things around. The improvement in H2-2020 is also the result of the successful acceleration of the group's plan to reduce fixed costs and improve its pricing policy.

Indeed, in its strategic plan called "Renaulution", the French group has given priority to cash generation and profitability. In addition, the actions undertaken to resist the health crisis have shown initial positive impacts in the second half of 2020. They are illustrated in particular by a remarkable improvement in operating profitability over this period.

In H2 2020, the Renault group recorded an operating margin of 3.5% of revenues. In addition, the Automotive division's free cash flow from operations was positive. These strong performances show the first signs of the company's recovery after the strong impact of the pandemic in the first half of 2020.

Renault's revenues and operating margin in 2020

In 2020, Automotive excluding AVTOVAZ saw its sales fall by 23.0% year-on-year to 37,736 million euros. The volume effect was negative at -19.2 points. This is mainly due to the health crisis and the change in commercial policy. Sales to partners decreased by -5.1 percentage points.

They were also affected by the Covid-19 pandemic and the suspension of Rogue production for Nissan. 2,662 million (at 4.8% of revenues) in the previous year.

In 2020, AVTOVAZ contributed €145 million to the operating margin, compared with €155 million the year before. This was also the case for Sales Financing, which contributed €1,007 million, compared to €1,223 million in the previous year.

This decline is due in particular to the drop in activity marked by a 17% decrease in new financing. It is also caused by the rise in the cost of risk. The latter represents 0.75% of average outstandings in 2020, compared to 0.42% in 2019.

In addition, mobility services also contributed to the company's operating margin in 2020. Their contribution is estimated at EUR -35 million.

This underperformance is the result of significantly higher restructuring costs and asset impairments. For the full year 2020, the group's financial result amounted to -€482 million, compared to -€442 million in the previous year. This is due to an increase in average debt.

In 2020, current and deferred taxes amounted to EUR -420 million, compared to EUR -1,454 million a year earlier. For the year, the company posted a negative Automotive operating free cash flow (including AVTOVAZ) of -€4,551 million, compared with €153 million in 2019.

Renault's dividend and market capitalisation in 2020

Due to the deteriorated results recorded in 2020, Renault's Board of Directors has decided not to pay a dividend to its shareholders for this year. Furthermore, the company is one of the companies present on the equity markets.

The Renault share is listed on the Paris Stock Exchange on Euronext. At the end of 2020, the company was included in the CAC 40 stock market index with a market capitalisation of EUR 9.11 billion.

Trade the Renault share!
77% of retail CFD accounts lose money. You should consider whether you can afford to take the high risk of losing your money. This is an advert for trading CFDs on Plus500