Founded in 1865, Nokia is a multinational telecommunications company based in Espoo, Finland. During 2020, the group experienced difficulties in growing its business. The company's revenue declined in each of the four quarters of this year. Here are details of the performance achieved by the telecoms equipment manufacturer in the 2020 financial year.

Trade Nokia shares!
77% of retail CFD accounts lose money. You should consider whether you can afford to take the high risk of losing your money. This is an advert for trading CFDs on Plus500 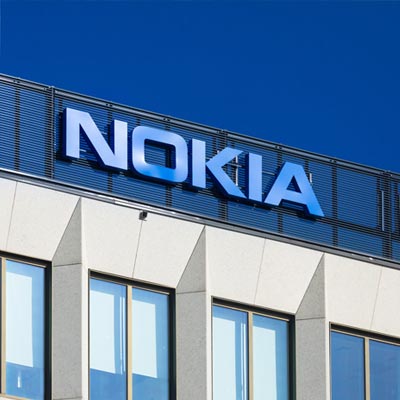 In the first three months of 2020, telecoms equipment manufacturer Nokia saw its quarterly revenue fall by 2.4% compared to Q1-2019 to €4.91 billion. This was below market estimates. The market expected a figure of €5.12 billion.

Better than expected results in Q2-2020

In the second quarter of 2020, the Nokia group unveiled solid results illustrating a rebound in the company's activity. In particular, the company returned to profit. Indeed, over this period, the telecommunication equipment manufacturer recorded an operating profit of 170 million euros, compared to a loss of 57 million euros a year earlier.

For the whole of Q2-2020, the company's quarterly turnover amounted to EUR 5.09 billion, down 11% year-on-year. It was impacted by the Covid-19 health crisis to the tune of EUR 300 million. 300 million, which caused delivery and implementation difficulties.

In addition, the gross margin percentage of the Networks business was 78% of quarterly sales. It improved by 4.5 percentage points. This contributed to profitability gains in the quarter. For Q2-2020, the company's gross margin (excluding one-offs) was 39.6%.

This exceeded the market's expectations of 36.1%. In fact, the gross margin evolution is supported by the ramp-up of the 5G "ReefShark" chips. These are profitable for the Finnish equipment manufacturer. Also, at the time, they had constituted 25% of total 5G shipments made in Q2-2020, compared to 17% in Q1-2020.

For the full third quarter of 2020, Finland's Nokia Group reported quarterly revenue of €5.294bn. This was 7% lower than in the same period last year. The turnover also fell short of the market's expectations of more than EUR 5.4 billion.

In the July-September period, the company saw its quarterly net profit more than double. It reached €193 million, compared to €82 million in Q3-2019. This performance was driven in particular by lower costs. In addition, the company gradually improved its profitability during the quarter.

The operating margin (excluding IFRS accounting standards) was 9.2% at the end of Q3-2020. A year earlier, it was 8.4%. In addition, at the time of publication of this quarter's results, Nokia had signed 101 contracts with operators for 5G equipment.

Together with Sweden's Ericsson and China's Huawei, the three companies had, at that time, a share of around 80% of the market for fifth generation networks.

Nokia Group's business declined in the last three months of FY2020 as a whole. During this period, the company's quarterly revenue amounted to EUR 6.57 billion. This was 5% lower than a year earlier. However, the company exceeded the market's expectations of an average turnover of 6.42 billion euros.

Furthermore, in the fourth quarter of 2020, the Finnish telecom equipment manufacturer recorded a drop in sales. This decline occurred despite increased investment in 5G. However, the group pointed out that the decline in traditional radio access products was offset by the rise in 5G.

For Q4-2020, the company's operating profit was €475 million, compared to €803 million in the same period last year. For the three months to 31 December as a whole, the company delivered underlying earnings of EUR 0.14 per share, compared to EUR 0.15 a year earlier.

Overall performance in the financial year 2020

For the twelve months of fiscal year 2020, Nokia Group's annual revenue was EUR 21.9 billion. This represents a decline of 6.2% compared to the previous year. However, the company recorded a clear improvement in its operating profit for the whole of 2020.

It reached 2.1 billion euros for the year. It should be noted that this value was calculated without considering the IFRS accounting standard. In 2020, the company generated a net result of -2.4 billion euros, compared to a profit of 7 million euros the previous year. This performance is due to the impact of an exceptional charge of EUR 2.9 billion. This relates to the derecognition of deferred tax assets in Finland.

At the beginning of February 2021, the Finnish equipment supplier has already signed 195 contracts with operators for 5G equipment. This figure also takes into account paid trials and demonstrations as well as commercial agreements.

Nokia's dividend and market capitalisation in 2020

Nokia's Annual General Meeting of Shareholders was held on 08 April 2021. At this meeting, they approved the Board's decision not to pay a dividend for the year 2020.

In addition, Nokia shares are listed on three stock exchanges. The company is listed on the Helsinki Stock Exchange, the New York Stock Exchange and the Euronext market on the Paris Stock Exchange. In 2020 (as of June), its market capitalisation is estimated at 24.591 billion dollars.

Trade Nokia shares!
77% of retail CFD accounts lose money. You should consider whether you can afford to take the high risk of losing your money. This is an advert for trading CFDs on Plus500