Nestlé is a Swiss company that operates in the field of distribution and food. The group is recognised as the world's leading food company. In 2020, its business grew. During this year, the company recorded its strongest growth for five years. Find out here what you need to know about the group's annual performance.

Trade in Nestle shares!
77% of retail CFD accounts lose money. You should consider whether you can afford to take the high risk of losing your money. This is an advert for trading CFDs on Plus500 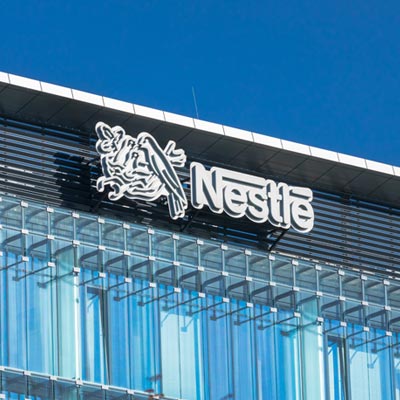 In the first quarter of 2020, the Nestlé Group announced an increase in sales over this period. This performance was driven by precautionary purchases made by many consumers before the implementation of the containment measures adopted in several countries to fight the Covid-19 pandemic.

For the quarter as a whole, the Swiss food giant reported organic sales growth of 4.3%. Sales in Q1-2020 amounted to 20 billion Swiss francs. Sales growth was driven by strong momentum in the Americas and in the Emena region (Europe, Middle East and North Africa).

At that time, the Swiss group estimated that petcare products made a significant contribution to this growth.

Group business improves in the first nine months of 2020

In the first nine months of 2020, the Nestlé Group recorded better than expected sales. Sales amounted to CHF 61.9 billion. However, it reported a year-on-year decline of 9.4%. On the other hand, in Q3-2020, the company saw an acceleration in organic growth to 4.9%.

It reached 3.5% in the first nine months of the year under review. It also includes real internal growth (RIG) of 3.3%. This development was supported by the increase in the US market during this period. It was also supported by increased sales of Purina pet food products.

Despite the coronavirus health crisis, the Health business was very strong. Nestlé Health Science grew by more than 10% over the period. This logically supported the good level of sales in the first nine months of 2020.

Performance of financial indicators for the full year 2020

For the full year 2020, the Nestlé Group achieved organic growth of 3.6%. This is the highest level achieved by the company in the last five years. In particular, it exceeded the market's expectations of a 3.5% increase. For its part, the company was expecting to achieve 3% growth this year.

This growth was driven by strong sales momentum in the Americas region. It was also driven by Purina petcare and Nestlé Health Science. In addition, for the full year 2020, the food and beverage company achieved sales of CHF 84.343 billion, compared to CHF 92.568 billion in 2019.

It reported a year-on-year decline of 8.9%. The company's net profit for the year was 12.2 billion Swiss francs. Compared to the previous year, it fell by 3.0%. However, it came in above market expectations. The market expected CHF 11.97 billion.

Earnings per share remained stable year-on-year at CHF 4.30 (on a reported basis).

Nestlé dividend and market capitalisation in 2020

At the Nestlé Group, the dividend is distributed once a year. This is after approval at the company's Annual General Meeting of Shareholders. For the year 2020, the Board of Directors of the company decided to increase the dividend by 5 centimes compared to the previous year (CHF 2.70 per share).

The dividend paid for the 2020 financial year is therefore CHF 2.75 per share. This is the 26th consecutive year in which the dividend has been increased. In addition, the Nestlé share is listed on the SIX Swiss Exchange. In 2020 (as of December), the company's market capitalisation was estimated at USD 328 billion.

Trade in Nestle shares!
77% of retail CFD accounts lose money. You should consider whether you can afford to take the high risk of losing your money. This is an advert for trading CFDs on Plus500