Recognised as the leading airline group in Europe, Lufthansa also remains a major player in the industry worldwide. Like many other airlines, the German company was also affected by the coronavirus pandemic in 2020. The pandemic created a difficult market environment that did not help the global economy to function well during the year. This had a direct impact on the company's annual results. Details in this article.

Trade the Lufthansa share!
79% of retail CFD accounts lose money. You should consider whether you can afford to take the high risk of losing your money. This is an advert for trading CFDs on eToro 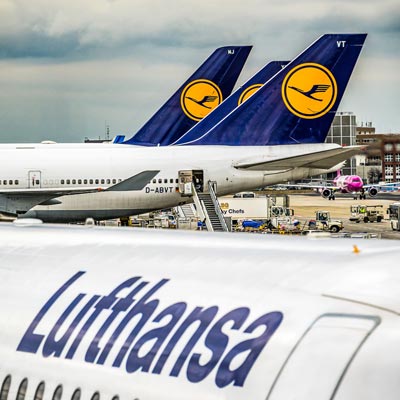 Global update on the group's business in 2020

The Covid-19 health crisis brought air traffic to a standstill during 2020. Travel restrictions and containment measures were factors that caused air travel demand to plummet during the year. This situation has penalised several airlines.

This is particularly true of the Lufthansa Group. The latter saw its results heavily impacted by the coronavirus pandemic. This is illustrated by the colossal loss of earnings recorded by the company in the 2020 financial year. Indeed, the company posted a record net loss of 6.7 billion euros for the year.

As a reminder, a year earlier, the company had made a net profit of 1.2 billion euros. In addition, for the whole of 2020, the number of passengers transported was 36.4 million. The group's adjusted Ebit came to -5.5 billion euros, compared to 2 billion euros in the previous year.

Over the twelve months of the year 2020, the German group achieved a turnover of 13.6 billion euros, compared to 36.4 billion euros in 2019. It is therefore down sharply by 63% year-on-year. In addition, Lufthansa has taken strong measures to deal with the health crisis. The company has put in place a rescue plan for an amount of 9 billion euros.

Also, the company had to reduce its workforce by almost 20%. As of 31 December 2020, the available liquidity is estimated at 10.6 billion euros. This amount was considered sufficient to withstand the difficult market environment imposed by the health crisis.

The effects of the coronavirus pandemic continued to affect the Lufthansa Group's business in the first quarter of 2021. However, the German company managed to reduce its net loss during this period, thanks to savings. The loss was €1 billion, compared with a loss of €2.1 billion a year earlier.

Between January and March 2021, the airline carried 3 million passengers. In the first three months of this year, the company's turnover reached €2.6 billion, down 60% on the same period last year. The group's Ebit amounted to -1.2 billion euros.

It remained at approximately the same level as last year. At the end of March 2021, the group had an estimated net debt of 10.9 billion euros.

In the second quarter of 2021, the Lufthansa Group benefited from the easing of travel restrictions. This led to a rebound in the market, an increase in bookings and in the number of passengers carried during this period. In June alone, bookings doubled compared to their level at the beginning of April.

In addition, the recovery in demand has enabled the company to halve its net loss for the quarter. For the period from April to June 2021, it posted a net loss of -756 million euros, compared to -1.5 billion euros a year earlier. The group's adjusted Ebit was negative at 952 million euros.

Quarterly results in the third quarter of 2021

The third quarter of 2021 was marked by a strong increase in travel demand. This enabled Lufthansa to record its first operating profit since the advent of the coronavirus epidemic. For the period as a whole, the group's adjusted Ebit amounted to €17 million, compared to a loss of €1.3 billion in Q3-2020.

For the quarter as a whole, Europe's leading air transport group recorded a turnover of 5.21 billion euros, compared to 2.66 billion euros in the same period last year. For the first nine months of this year, turnover was around €11 billion. It reported stability compared to last year.

The net result for the period was -1.9 billion euros, compared to -5.6 billion euros a year earlier. At the end of September 2021, free cash flow was positive at €13 million.

About Lufthansa's dividend and market capitalisation

In view of the economic downturn due to the Covid-19 health crisis, the Lufthansa Group did not pay a dividend to its shareholders for the financial year 2020. This is also the case at several other companies in the airline industry.

In addition, the company continues to have a strong presence in the financial markets. It is listed on the Deutsche Boerse AG market. It is also a constituent of the DAX 30 stock market index. As of November 2021, its market capitalisation is estimated at more than EUR 6 billion.