The Intel Group remains a key player in the semiconductor industry. It is one of the few remaining companies in the sector that designs and manufactures its own chips. In addition, the company has been able to cope better with the difficulties observed in the meantime in the supply chains of electronic components, unlike some of its competitors. However, in 2020, the group's business declined compared to the previous year. Find out more about the company's results for this year and the first three quarters of the 2021 financial year here.

Trade Intel shares!
77% of retail CFD accounts lose money. You should consider whether you can afford to take the high risk of losing your money. This is an advert for trading CFDs on Plus500 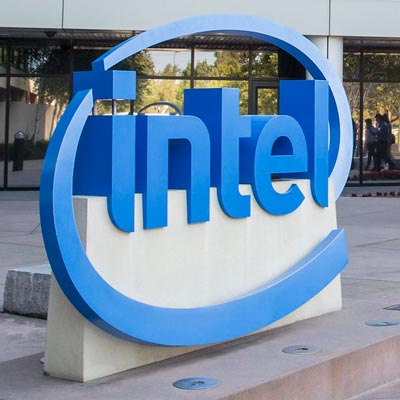 Intel Group ended fiscal 2020 on a high note. It reported results that exceeded all expectations for the last three months of this year. In the fourth quarter, the company's revenue amounted to 20 billion dollars. This was $2.6 billion more than originally expected.

However, this quarterly turnover was down by 1% year-on-year. For the full twelve months of fiscal year 2020, the technology chipmaker achieved annual sales of approximately $78 billion. This is up 8% from its level in the previous year.

Between October and December 2020, the technology chipmaker earned a net profit of nearly $6 billion, down 15% year-on-year. For the year, it reached $21 billion. On the other hand, the strong Q4 results were driven by record PC revenues.

PC chip sales were up 33% year-on-year in Q4. This performance was helped by the Covid-19 pandemic, which boosted PC purchases.

In its results for the first quarter of 2021, Intel Group exceeded all expectations, thanks to the strong momentum of PC sales. In fact, during this period, the volume of PCs sold rose by 38% year-on-year. The US chipmaker set a new record for notebook volumes in the quarter.

In the second quarter of 2021, Intel Group's results came in above market and company expectations. However, they were flat compared to the same period last year. Over the whole period, the company achieved a turnover of 19.6 billion dollars.

The market was expecting $17.8 billion for the quarter. Between April and June 2021, the chipmaker posted a net profit of $5.1 billion. The strong performance in the quarter was driven by PC chip sales.

These were up 6% year-on-year in the same period. In contrast, the data centre business recorded a 9% decline in the second quarter of 2021. Mobileye, on the other hand, saw its revenues increase by 124% over this period. This is actually the autonomous driving specialist that the group acquired in 2017.

In the third quarter of 2021, Intel Group was in turn affected by the shortage of electronic chips. A situation that logically penalised the quarterly results of the American company. Over this period as a whole, its turnover amounted to 19.2 billion dollars. It increased by 5% year-on-year.

For Q3-2021, the processor manufacturer recorded a net profit of $6.8 billion, up 60%. This performance was achieved despite a drop in the company's operating margin. It stood at 27.2% of sales, down 0.4 percentage points.

Between July and September 2021, the semiconductor manufacturer saw the PC division decline, mainly due to the shortage of electronic chips. In contrast, during the quarter, the group enjoyed a remarkable recovery in its Data Center and IoT businesses.

About Intel's dividend and market capitalisation

A dividend is the amount of money a company pays out to its shareholders as income. Intel Group is one of the companies that has a tradition of paying this coupon to beneficiaries in its time. For the financial year 2020, the Board of Directors of the group has decided to increase the annual dividend by 5%. The dividend was thus increased to $1.39 per share.

This is the market that brings together the listings of companies operating in the technology sector in the United States, as well as some foreign groups operating in this field. Intel is also included in the Nasdaq 100 stock index. As of November 2021, its market capitalisation is estimated to be over $200 billion.

Trade Intel shares!
77% of retail CFD accounts lose money. You should consider whether you can afford to take the high risk of losing your money. This is an advert for trading CFDs on Plus500