Are you interested in the American stock market and want to know how you can buy shares of the Dow Jones stock index? In this article, we are going to remind you about this stock market index, how it works and the stocks that make it up, and explain to you how to buy or trade them online in a simple way.

Trading Dow Jones shares!
79% of retail CFD accounts lose money. You should consider whether you can afford to take the high risk of losing your money. This is an advert for trading CFDs on eToro 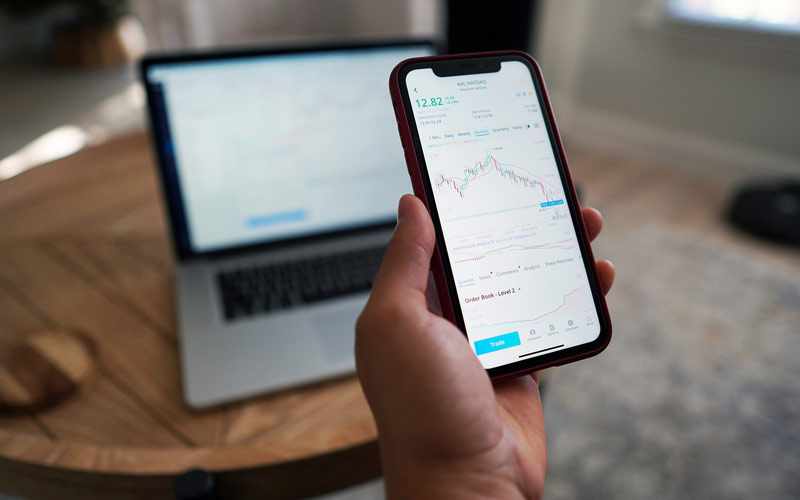 Reminder about the Dow Jones :

What is the Dow Jones? It is of course a stock market index which is probably also one of the oldest indices in the world. The Dow Jones Industrial Average, often referred to simply as the Dow, was launched in 1896. The journalists Charles Henry Dow and Edward Jones are at the origin.

The Dow Jones is owned by a joint venture company called Dow Jones Indexes, which is 90% owned by the CME Group and 10% by the Dow Jones Company.

The Dow Jones or DJ 30 is also one of the 3 major stock market indices in the United States along with other major indices such as the Nasdaq and the S&P500.

To better understand, let's say that the Dow Jones Industrial Average is the American equivalent of our CAC 40 stock market index, which is the reference index of the Euronext Paris stock market. The DJ30 tracks the 30 most important American stocks listed on the NYSE or New York Stock Exchange.

This index is therefore considered to be a performance indicator for the entire US economy. Thus, when the US economy is growing, the Dow Jones price tends to rise, and conversely, when there is a US economic crisis, the price of this index falls.

How does the Dow Jones work?

The calculation of the Dow Jones price is thus based on the average price of its shares. Thus, a company with a high share price will have a greater weight in this index. At the time of its creation and for several years, the calculation of the Dow Jones consisted solely of the sum of the shares divided by the number of companies. It was then revised to accommodate certain changes that may occur, such as special dividends, mergers or stock splits. Thus, the index now uses a specific divisor instead of the number of companies, which is the Dow divisor and which is adjusted permanently. It is published in the Wall Street Journal.

The composition of the Dow Jones is therefore 30 companies and has been changed more than sixty times with the first change barely three months after its launch. A committee is in charge of these changes and is composed of representatives from the S&P Dow Jones Indices and editors from the Wall Street Journal.

What industries are represented on the Dow Jones?

The Dow Jones Index is a stock market index that is known to be particularly reliable when it comes to representing the US economy. Its accounts are particularly well thought out to reflect the economic situation in the United States in the best possible way. As a result, this index allows investors to invest in the most represented sectors of activity in this country and in the companies with the largest capitalizations in this economy.

The Dow Jones index thus makes it possible, in view of the weight of the companies that are part of its composition and whose shares can be bought or traded, to define a balance sheet and an inventory of the different economic sectors of the country. Here are the different sectors to invest in via Dow Jones shares and their share in this benchmark index:

Dow Jones shares are an interesting investment for individuals, but they also have some shortcomings and drawbacks.

As for their advantages, we can of course mention the fact that these stocks are extremely liquid because they are traded by a large number of investors. The data for the analysis of these stocks is also numerous and easy to find. Some of the stocks that are listed have been there for many years, which proves the solidity of the issuing companies.

As far as the shortcomings of Dow Jones stocks are concerned, they are very sensitive to the news and are particularly volatile in the event of an economic crisis.

To carry out these operations and buy Dow Jones shares, you can approach a broker or an online broker. Your stock market orders will then be placed directly on an investment platform or trading platform.

Finally, we'll take a look at some simple tips for buying one or more shares of the Dow Jones Industrial Average.

How do I invest in a stock index like the Dow Jones?

To invest in a stock market index like the Dow Jones, you can of course buy the shares that make up the index. But you can also trade these stocks with CFDs or speculate directly on the price of this American stock index. For this, you can also use CFDs but also other derivative products such as ETFs that replicate the movements of the Dow Jones index on the stock market.

Which Dow Jones stocks to buy will depend on your strategy and the objective of your investment. If your primary goal is a long-term return strategy, you should focus on stocks that pay dividends. But if your strategy is shorter term, growth or performance stocks will be preferred in order to realize capital gains.

Which Dow Jones stocks can I buy online?

Since the Dow Jones 30 is composed of only 30 stocks that are among the most important on the New York Stock Exchange, most stock brokers make them available to their investors. It is therefore quite easy to find any of these stocks online but beware! If you want to buy these stocks through a PEA, be aware that some stocks will not be accessible.