Founded in 1837, the Hermès Group is a French company specialising in the design, manufacture and sale of luxury goods. In 2020, the company's activity took place in a difficult context marked by the Covid-19 health crisis. This crisis led to a reduction in tourist flows. However, the company limited the impact of the pandemic on its results thanks to the strong growth of online sales.

Trade the Hermes share!
79% of retail CFD accounts lose money. You should consider whether you can afford to take the high risk of losing your money. This is an advert for trading CFDs on eToro 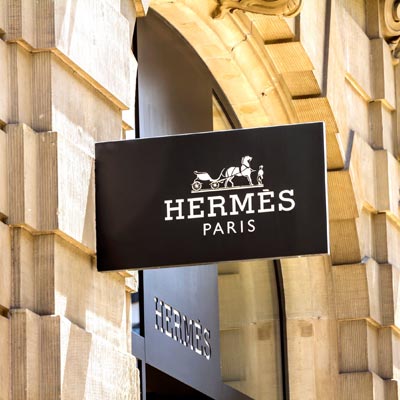 Turnover by geographical area in 2020

This accelerated significantly in the last quarter with growth of 16%. 620 million in 2020, down 28.6%. 953 million, down 20.0%. These declines in turnover can be explained in particular by the closure of most of the group's shops during the month of November in several countries.

They are also due to the new wave of restrictions imposed from mid-December. On the other hand, the group's business grew by 14% in Asia-Pacific excluding Japan, with a turnover of 2.9 billion euros. 2.9 billion. This performance was driven by strong growth in Greater China, Australia and Korea.

In 2020, Leather Goods & Saddlery posted sales of EUR 3.21 billion, down 4.8%. This business line experienced very strong demand, particularly in the second half of the year, when it returned to growth. In the last quarter alone, growth was 18%.

1.41 billion, down 9.2% year-on-year. Despite this decline over the year, it should be noted that this division continued to grow in the fourth quarter with an increase of 12%.

Silk & Textiles saw its turnover fall by 22.8% to 452 million euros. This decline is mainly due to the fall in sales to travellers. The Perfumes & Beauty business unit recorded a 19% decline in turnover to 263 million euros.

This decline is explained by the drop in tourist flows. On the other hand, activity in the Watchmaking business line showed growth. 196 million, up 2.3% year-on-year. This upward trend was also observed in the Other Hermès Sectors division.

As a reminder, it had been 2.34 billion euros a year earlier. Operating profitability was 32.4% of sales. For the whole of the 2020 financial year, the consolidated net result (group share) reached 1.38 billion euros, compared to 1.52 billion euros for the previous year. This represents a limited fall of 9% over the one-year period.

Financial situation at the end of the financial year 2020

In 2020, operating investments are estimated at 448 million euros, compared to 478 million euros the year before. At 31 December 2020, the company had a net cash position of €4.72 billion, compared to €4.37 billion a year earlier at the same date.

About Hermès' dividend and market capitalisation

The Hermès Group is one of the companies that pays a coupon to its shareholders at the end of each financial year. The shareholders met at the Annual General Meeting on 4 May 2021. At this meeting, the Board of Directors proposed paying a dividend of €4.55 per share for the year 2020.

In addition, the Hermès Group has a remarkable presence on the equity markets. The company is listed on the Paris stock exchange. It is also a component of the French CAC 40 stock market index. As of November 2021, its market capitalisation is estimated at more than 100 billion euros.