Established in 1953, Eni is an Italian oil and gas company based in Rome. The group is one of the world's leading oil companies. It is present in 68 countries and has approximately 31,400 employees worldwide. The company was also affected by the Covid-19 health crisis that affected the entire energy sector in 2020. Here are the main points to remember about the annual results for the year.

Trade the ENI share!
77% of retail CFD accounts lose money. You should consider whether you can afford to take the high risk of losing your money. This is an advert for trading CFDs on Plus500 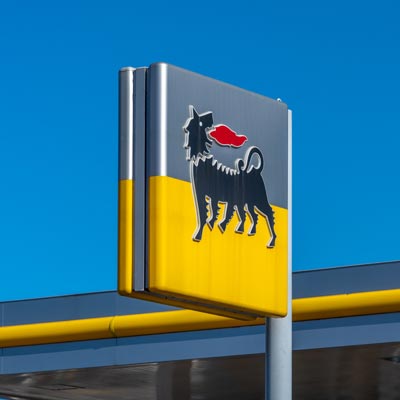 The year 2020 was marked by the Covid-19 pandemic. This epidemic has had a major impact on economic activities around the world. Several sectors of activity have experienced a remarkable decline during this year. The energy sector remains one of the most affected by the health crisis.

For the energy industry, this is the most difficult year in its history. The Covid-19 pandemic led to a collapse in oil and gas consumption. A situation that heavily affected the entire energy sector throughout 2020. For much of this 12-month period, the global economy has fallen sharply.

For the year 2020, the Eni Group's annual turnover reached €43.98 billion. It fell by 37% year-on-year. This decline is therefore more pronounced than that forecast by the market, which was aiming for a turnover of around 55.88 billion euros for this year.

For the year 2020 as a whole, the company posted an abysmal loss of 8.56 billion euros. This is mainly due to the fall in oil and gas prices caused by the coronavirus pandemic. Here too, the company failed to meet market expectations. This performance is worse than expected.

Indeed, the market was targeting a loss of 7.57 billion euros for the financial year 2020. As a reminder, for the year 2019, the Italian hydrocarbon giant had recorded a profit of €148 million. In Q4-2020, it suffered a net loss of €725 million. This was the quarter in which the global economy had recovered from periods of tight containment.

In addition, the net loss for the fourth quarter of 2020 was down from its level in the same period of fiscal 2019. At that time, the group had recorded a shortfall of €1.89 billion. Furthermore, for the whole of 2020, Eni posted an adjusted net loss of €742 million.

This is in fact an indicator that is very much probed by the markets. Indeed, it does not take into account exceptional items. In Q4-2020, the adjusted result came out positive. The company exceeded expectations with a small profit of EUR 66 million.

Over the twelve months of the 2020 financial year, hydrocarbon production fell by 7% to 1.73 million barrels per day (mbd). However, this performance is in line with the company's targets. Furthermore, the Brent oil price is a benchmark for the oil market.

Over the year 2020, it has fallen by 35%. It should be noted that oil prices had reached lower levels after the first confinements in the spring. Worse still, at the beginning of April, they moved (for a short time) into negative territory.

The Total Group posted a loss of $20.3 billion in 2020. BP's and Chevron's losses were $7.2 billion and $5.5 billion respectively. These are performances never recorded before. For several years, these key players had always seduced investors with profits reaching billions of dollars.

In this difficult context, the Eni group has shown great strength. It has also shown remarkable flexibility. This has enabled it to adapt quickly to this unprecedented context marked by the coronavirus health crisis. In July 2020, the company announced its ambition to reduce its investments by 35% during this year.

This reduction is mainly aimed at exploration and production activities (upstream). In 2020, the company also planned to launch a cost savings plan estimated at €1.4 billion.

About the carbon neutrality objective

Like all major players in the energy sector, the Eni Group has been facing significant pressure to review its model. This is due in particular to the climate crisis and the drop in demand for hydrocarbons, penalized by the coronavirus epidemic.

The Italian company is counting on a strengthening of the development of renewable energy activities. This perspective is supported by the group's idea that there is no better tomorrow for companies that operate solely in the oil and gas sector.

For example, in December 2020, the company announced the purchase of a 20% stake in the project between the Norwegian group Equinor and the British company SSE. The aim of this project is to build (off the coast of the United Kingdom) the largest offshore wind farm in the world.

In addition, the Italian oil and gas giant has made a strong commitment to achieve carbon neutrality by 2050 by reducing the net greenhouse gas emissions of its energy products by 80%. It therefore aims to exceed the 70% threshold defined by the IEA (International Energy Agency).

Italy's Eni also plans to achieve carbon neutrality in the upstream sector (production and exploration) by 2030. Thus, it has begun to accelerate its energy transition. To achieve its objectives, the company plans to increase the capacity of its biorefineries by 2024.

It is also counting on a strong use of biogas. The group also aims to recycle its products and intends to use carbon capture.

Eni's dividend and market capitalisation in 2020

Trade the ENI share!
77% of retail CFD accounts lose money. You should consider whether you can afford to take the high risk of losing your money. This is an advert for trading CFDs on Plus500