The Engie group is a global leader in low-carbon energy and services. It is present in several countries with almost 170,000 employees worldwide. In 2020, the Covid-19 health crisis weighed heavily on the company's activities. This explains the less interesting results recorded by the company for the year as a whole.

Trade the Engie share!
79% of retail CFD accounts lose money. You should consider whether you can afford to take the high risk of losing your money. This is an advert for trading CFDs on eToro 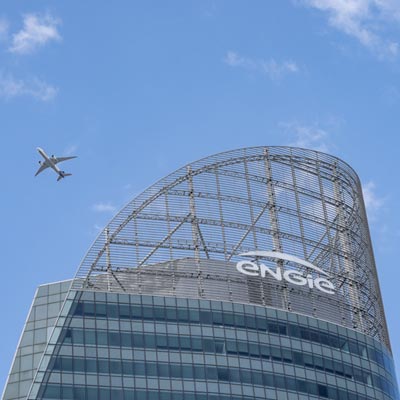 Lower turnover in 2020 for Engie

For the financial year 2020, the Engie group has achieved an annual turnover of €55.8 billion, compared to €60.1 billion in 2019. It therefore reports a year-on-year discount of 7.2% gross and 5.7% organic. In addition, the gross drop in turnover includes a negative currency effect.

However, these were partly offset by a positive net perimeter effect. The latter takes into account several acquisitions made in Customer Solutions, particularly Conti in the United States and Powerlines in Europe.

The organic decline in annual sales was mainly due to the Covid-19 health crisis. It had a significant impact on the Group's activities in all geographical areas, particularly in Supply and Customer Solutions.

However, this organic decline was partly offset by revenue growth in Brazil and by volume and price effects on electricity sales in France.

Geographically, France recorded a 22.2% organic drop in ROC to €2.22 billion in 2020, compared to €2.86 billion a year earlier. This decline was partly due to the negative impacts of the Covid-19 health crisis.

The Rest of Europe shows an ROC of €648 million in 2020, compared to €707 million in 2019. It therefore reports an organic decline of 9.9% year-on-year. This is mainly due to the impact of the coronavirus pandemic on Client Solutions in the UK, Italy and Benelux. The health crisis also affected the Supply business.

The negative effects of the health crisis on the Supply business and the termination of the LNG contract were the main factors causing this decline. In 2020, there is organic stability in the ROC in the Middle East, Africa & Asia region. It amounts to EUR 518 million.

The OIR of the "Others" segment experienced a strong organic decline over the whole of the 2020 financial year. This decline is due to the impact of the health crisis on the activities of SUEZ, Companies & Public authorities, and GEM.

In fiscal year 2020, the Engie Group's Ebitda reached €9.3 billion, compared with €10.4 billion at 31 December 2019. It was down 10.5% year-on-year. In organic terms, it was down 6.5% year-on-year. Moreover, these organic and gross variations are in line with the decline in operating income.

The Lean 2021 plan also continued to favour the production of results in terms of current operating income and Ebitda. These two financial indicators were slightly above the company's expectations.

In 2020, Engie recorded a recurring net profit (group share) of €1.7 billion, compared to €2.7 billion a year earlier. This underperformance was driven by a decline in operating income and growth in recurring financial expenses. It is also due to the increase in the recurring effective tax rate from 28.2% to 32.5%.

Net income, group share, amounted to EUR -1.5 billion. 2.5 billion due to the decline in recurring net profit and high impairment losses of

Financial structure at the end of the financial year 2020

At the end of fiscal year 2020, the Engie Group succeeded in maintaining a solid liquidity level. This reached €23.0 billion (net cash + undrawn credit lines - outstanding commercial paper) at the end of December this year. 13.3 billion in liquidity.

At the end of December 2020, the net financial debt/Ebitda ratio was 2.4x. It is down 0.1x compared to the same period last year. The economic net debt/EBITDA ratio is stable over one year and stands at 4.0x at the end of 2020.

Dividend and market capitalisation of Engie in 2020

Engie's Annual General Meeting of Shareholders was held on 20 May 2021. At this meeting, the company's Board of Directors proposed the payment of a dividend of €0.53 per share for the 2020 financial year. The payment was made on 26 May 2021.

In addition, you should know that the group is present on the equity markets. It is listed on the Paris and Brussels stock exchanges. In 2020 (as of October), Engie's total market capitalisation is €28.82 billion.