Easyjet is a British company operating in the air transport sector. It is one of the leading low-cost airlines in Europe. During its 2020/21 financial year (1 October 2020 to 30 September 2021), the group saw its business heavily affected by the Covid-19 pandemic. This has had a significant impact on its financial performance. Here are the key points to remember about the company's annual results.

Trade EasyJet shares!
77% of retail CFD accounts lose money. You should consider whether you can afford to take the high risk of losing your money. This is an advert for trading CFDs on Plus500 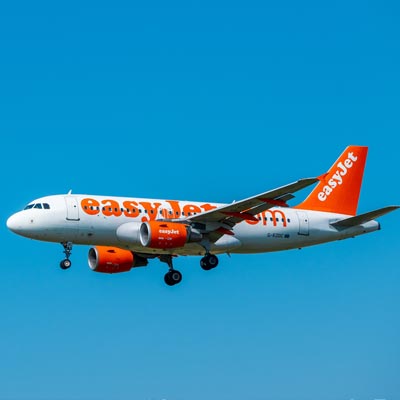 The Covid-19 health crisis disrupted Easyjet's business in the first half of its 2020/21 financial year. As a result, the group reported mixed results for the period. For the first six months of the year as a whole, turnover was £240m, down 90% year-on-year.

However, it came in ahead of market expectations. The market was expecting £235 million. The sharp fall in half-yearly turnover was due in particular to the drastic fall in passenger numbers. The number of passengers fell by 89.4% to 4.1 million in the first half of the year.

As a result of the fall in air traffic, the group made a net loss of £549 million in the first half of 2020/21, compared with £324 million at the same time a year earlier. Between October 2020 and March 2021, the British low-cost airline made a pre-tax loss (excluding exceptional items) of £701 million.

A year earlier (in the same period), the group had recorded a loss of £193 million. This heavy loss in H1-2020/21 was due in particular to the effects of the coronavirus pandemic. However, this amount is in line with the company's guidance, which forecast a loss of between £690 and £730 million.

The market was expecting a loss of £706 million for the six months under review. On the other hand, one of the satisfactions of this half-year is the consumption of cash. It averaged £39 million per week in Q1-2020/21. In contrast, in Q2 it was £38m.

The company was expecting £40 million. As at 31 March 2021, the group's free cash flow is estimated at around £2.9 billion. This amount should enable the British company to deal with the Covid-19 health crisis.

In the third quarter of 2020/21, Easyjet continued to be affected by the coronavirus pandemic, as did the rest of the industry. However, its quarterly results were in line with the group's expectations. In particular, the British company saw its number of passengers increase over this period.

It reached around 4 million, almost 17% of its Q3-2019/20 level. This growth was driven by the lifting of international travel restrictions and the evolution of the vaccination campaign during this period. Between April and June 2021, the airline recorded a turnover of £212.9 million, compared to £7.2 million a year earlier.

This quarter's turnover has therefore seen a significant increase compared to Q3-2019/20. As a reminder, this quarter of the previous financial year was marked by the introduction of the first containment measures in the UK and in several other countries around the world. This led to a collapse in air traffic at that time.

In the third quarter of 2020/21, the company posted a pre-tax loss of £318 million, compared with a shortfall of £346 million a year earlier. At the end of June 2021, the group's net debt was stable at around £2bn. It should be noted that the company has shown disciplined management in the quarter.

In the final quarter of the 2020/21 financial year (ending September 2021), UK-based Easyjet took advantage of the rebound in air traffic to increase its number of flights. During this period, the group carried 17.3 million passengers. This is 58% of the level recorded in 2019 before the advent of the pandemic.

In its financial report for the fourth quarter of 2020/21, the British low-cost airline highlighted its continued disciplined cash management. As a result, between July and September 2021, the group generated almost £40 million of cash from operations. At the same time, its net debt has been reduced.

It stood at around £0.9 billion, compared to £2 billion in the previous quarter. This reduction was due to a successful rights issue of £1.2 billion. It should be noted that part of this amount (£90 million) was received after the end of this quarter. At the end of Q4-2020/21, the company has approximately £4.4 billion of cash.

For the full fiscal year 2020/21 (October 2020 to September 2021), UK-based Easyjet had annual revenues of £1.46 billion. This is half the level of the previous financial year. This is mainly due to the impact of the health crisis which caused air traffic to fall for part of that year.

About Easyjet's dividend and market capitalisation

Due to the severe impact of the Covid-19 health crisis on its annual accounts, Easyjet Group has decided not to pay a dividend to its shareholders for the financial year 2020/21. Furthermore, the company reports a strong presence in the financial markets.

Trade EasyJet shares!
77% of retail CFD accounts lose money. You should consider whether you can afford to take the high risk of losing your money. This is an advert for trading CFDs on Plus500