Founded in 1870 and based in Frankfurt am Main, Germany, Deutsche Bank is recognised as the country's largest bank. It is also one of the largest banking groups in Europe. The company operates in more than 75 countries worldwide. In 2020, its business improved to its best year for five years. Here are the key points to remember about the group's results for this year and the first three quarters of the 2021 financial year.

Trade Deutsche Bank shares!
72% of retail investor accounts lose money when trading CFDs with this provider. You should consider whether you understand how CFDs work, and whether you can afford to take the high risk of losing your money. This is an advert for trading CFDs on Plus500 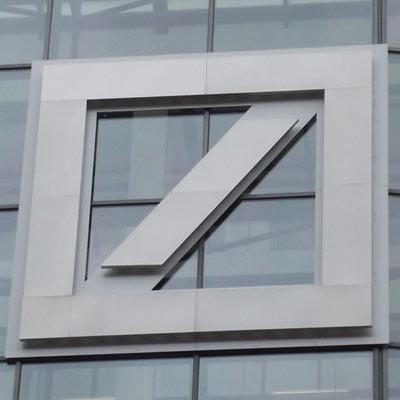 The group's results for the full year 2020

After five consecutive years of losses, Deutsche Bank has seen its accounts return to the black at the end of the 2020 financial year. For the full twelve months of this year, the German bank posted a group share net profit of €113 million, compared to a €5.7 billion shortfall in 2019.

In the fourth quarter, it reached 51 million euros, compared to a loss of 1.6 billion euros a year earlier in the same period. As a reminder, in 2019, the banking group had posted significant impairment and restructuring charges. This had kept its accounts in the red for the fifth year in a row.

The last time the company recorded a net profit (group share) was in the 2014 financial year. Between 2014 and 2019, the bank accumulated almost €15 billion in losses. Before tax, the profits made in 2020 amounted to €1.02 billion, compared to a deficit of €2.6 billion a year earlier.

In the financial year 2020, Deutsche Bank achieved a turnover of 24.03 billion euros, up by 4%. The company benefited from the volatility of the financial markets during the Covid-19 epidemic. This allowed it to make its investment bank its main source of profit.

In 2020, this activity generated revenues estimated at 9.28 billion euros, an increase of 32% over one year. In addition, it should be noted that during this year, the German group made provisions of around €1.8 billion to deal with credit risks. At the end of December 2020, the company posted a stable hard equity ratio of 13.6%.

In the first quarter of 2021, Deutsche Bank unveiled better than expected results. Between January and March, the German banking giant recorded revenues of €7.23bn, compared to €6.35bn in the same period last year. This was an increase of 14% year-on-year.

In Q1-2021, Germany's largest bank recorded its highest quarterly net profit in seven years (i.e. 2014). Indeed, in the first three months of the 2021 financial year, it stood at 908 million euros, compared to a net loss of 43 million euros a year earlier. The group also did better than the market forecast.

The latter was expecting a net profit of around 600 million euros for this quarter. Furthermore, the good performance achieved during Q1-2021 was driven by the investment bank. This division saw its turnover increase by 32% over this period with a 34% growth in revenues from bond activities.

Despite a difficult environment marked by the Covid-19 pandemic, Deutsche Bank Group has confirmed its recovery in the second quarter of 2021. It once again reported strong quarterly results. These exceeded all expectations. Between April and June, the bank generated a net profit (group share) of 692 million euros, compared to a net loss of 77 million euros in the same period last year.

This performance was driven by good cost discipline. It was also helped by a 90% year-on-year decrease in provisions for credit risk. 1.17 billion, a seven-fold increase on the previous year. For the whole of Q2-2021, the company's turnover reached EUR 6.24 billion, down slightly by 1% year-on-year.

The decline was due in particular to a fall in investment banking revenues in the quarter. 2.4 billion, down 11% year-on-year. The downward trend was also observed in the group's investment banking division. This division generated estimated revenues of 1.2 billion euros, down 8 per cent.

Quarterly update in the third quarter of 2021

It also came in above market estimates. The latter was targeting an amount of 135 million euros. The company's taxable profit for the quarter was 554 million euros, up 15% year-on-year. For Q3-2021, the institution recorded a turnover of 6.04 billion euros, compared to 5.9 billion euros a year earlier, at the same time.

This represents an increase of 2% year-on-year. This good performance was achieved despite the fall in investment banking revenues during the quarter. They fell by 6%. On the other hand, for the first nine months of the year 2021, the bank's net profit reached 1.8 billion euros.

The German Deusctche Bank Group is among the banking giants that have waived the dividend payment for the fiscal year 2020. The bank has therefore not distributed a coupon to its shareholders at the end of this financial year.

In addition, Deutsche Bank has a strong presence in the financial markets. The company is listed on the Frankfurt Stock Exchange. At the beginning of December 2021, its market capitalisation is estimated at more than EUR 20 billion.

Trade Deutsche Bank shares!
72% of retail investor accounts lose money when trading CFDs with this provider. You should consider whether you understand how CFDs work, and whether you can afford to take the high risk of losing your money. This is an advert for trading CFDs on Plus500