Groupe Danone is one of the world's leading food companies. It operates in more than 120 countries around the world. In 2020, the company's business was affected by the Covid-19 health crisis. As a result, the company's results for the year as a whole are less interesting.

Trade the Danone share!
79% of retail CFD accounts lose money. You should consider whether you can afford to take the high risk of losing your money. This is an advert for trading CFDs on eToro 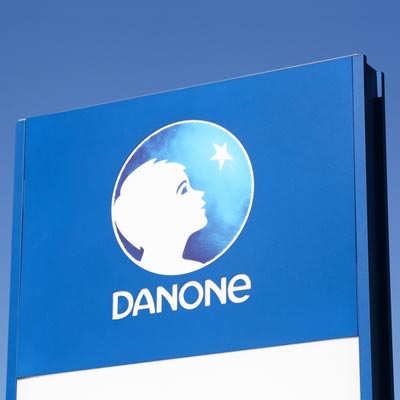 Danone's turnover down in fiscal year 2020

This decline is mainly due to the negative impact of exchange rates (-5.0%). This was due in particular to the depreciation of currencies against the euro in Russia, the United States, Indonesia and Latin America. In addition, the fall in annual turnover is also explained by a negative change in the scope of consolidation (-0.4%).

This relates to the deconsolidation of Earthbound Farm from the beginning of April 2019. It also takes into account the organic contribution of Argentina, which recorded an increase of 0.3%. It should be noted that in the fourth quarter of 2020, sales fell by 1.4% (like-for-like).

However, it improved significantly compared to the second and third quarters of 2020 with stable volumes. On a reported basis, Q4-2020 sales declined by 9.8%. This decline was due to a strong negative currency effect of 8.8% in the quarter.

In the first quarter of 2020, the group experienced enormous difficulties. The activity was penalised by a strong comparison base. Also, it was affected by adverse distribution channel dynamics.

For the full year of 2020, the French food giant generated a current operating profit of €3.3 billion, compared to €3.8 billion in the previous year. Over the one-year period, it reported a 10.9% decline on a like-for-like basis and 13.8% on a reported basis.

In 2020, the operating margin fell by 96 basis points to 11.8% compared to 12.8% the year before. In addition, net current profit from equity affiliates reached 85 million euros in 2020, compared to 98 million euros a year earlier. 98 million a year earlier. This decline is explained by the fall in performance of Mengniu and Yashili in China, particularly in H1-2020.

In 2020, Danone recorded a return to a better level in the Dairy and Plant-based Products division. It grew by a strong 3.4% (like-for-like), its strongest growth since 2012. The division's sales reached €2.2 billion compared to €1.9 billion in the previous year. Its operating margin was over 10% and stable year-on-year, despite the costs associated with the health crisis.

Sales in the Specialised Nutrition division fell by 0.9% (like-for-like) over the full year 2020. During the year, the division's business was heavily impacted by the Covid-19 pandemic. Its current operating margin was 24.5%, down 74 basis points.

In the twelve months of fiscal year 2020, the Waters division was affected by the travel restrictions caused by the coronavirus pandemic. As a result, its sales fell by 16.8% (like-for-like) over the year. The current operating margin was 7.0%.

Danone's financial structure at the end of 2020

Dividend and market capitalisation of Danone in 2020

On April 29, 2021, Groupe Danone's General Meeting of Shareholders was held. During this meeting, the company's Board of Directors proposed the payment of a dividend of €1.94 per share for the 2020 financial year. The payment was made in cash on 12 May 2021.

In addition, the company is also active in the equity markets. It is listed on the Paris Stock Exchange on the Euronext market. It is one of the companies that make up the French CAC 40 stock market index. As of October 2020, its market capitalisation was estimated at EUR 38.96 billion.