The entire banking sector suffered from the impact of the coronavirus pandemic in 2020. This situation did not spare the second largest German bank Commerzbank. Indeed, during this year, the group's business activity slowed down significantly compared to the previous year. As a result, the company suffered huge losses for the whole of 2020. This article provides an overview of the bank's annual performance.

Trade the Commerzbank share!
77% of retail CFD accounts lose money. You should consider whether you can afford to take the high risk of losing your money. This is an advert for trading CFDs on Plus500 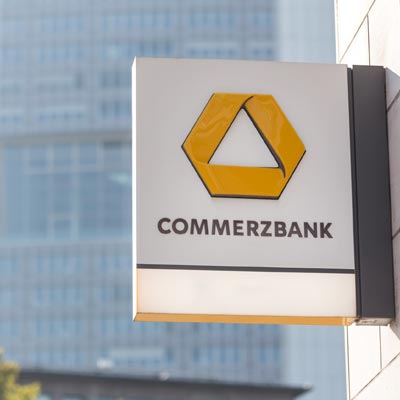 The health crisis in Covid-19 severely affected the Commerzbank Group's business in the 2020 financial year. As a result, the company's accounts went into the red for the year as a whole. 233 million over the twelve months of the year.

A year earlier, the bank had made a profit of 1.25 billion euros. Including restructuring charges, impairment of goodwill and other intangible assets, the group's net annual loss reached 2.87 billion euros in 2020. This compares with a profit of €585 million in the previous year.

This is the first loss recorded by the company since the financial crisis of 2009. Apart from the impact of the coronavirus pandemic, this huge loss was also caused by the extensive restructuring undertaken by the bank. It should be noted that in the fourth quarter alone, the German banking group suffered a net loss of 2.7 billion euros.

The other major disappointment of the year was the company's revenues. They fell short of market expectations. For the full year 2020, Germany's second-largest bank achieved revenues of €8.45 billion, compared to €8.61 billion in the previous year.

On the latest details announced for the "Strategy 2024" programme

In conjunction with the publication of its 2020 annual results, Commerzbank announced the final details of its "Strategy 2024" programme. The aim of this plan is to enable the group to return to a positive operating result from 2021.

These new hires should enable it to reduce its dependence on external service providers. In this way, Commerzbank intends to strengthen its position on the German banking market. It should be noted that more than 80% of the job cuts should be completed by the end of 2023.

Dividend and market capitalisation of Commerzbank in 2020

Like other companies in the banking sector, the Commerzbank Group has not paid a dividend for the financial year 2020. On the other hand, the bank has announced the return of the distribution of this coupon to shareholders, for the year 2023. It could pay them up to EUR 3 billion in 2023 and 2024.

In addition, Commerzbank has a remarkable presence on the stock markets. It is one of the most closely watched stocks by investors or traders. The company is listed on the Frankfurt Stock Exchange. In 2020 (as of February), it had a market capitalisation of EUR 7,276 billion.

Despite the impact of the Covid-19 health crisis, Germany's largest bank Deutsche bank did better than its rival Commerzbank. Its results came out better than those reported by the country's second largest bank.

In fact, unlike Commerzbank, which suffered huge losses in 2020 (2.87 billion euros), Deutsche bank posted a net profit of 113 million euros for the year, driven by its investment bank. This is its first profit for six years.

Also, the leading German bank performed better in the fourth quarter. In the last three months of 2020, the bank posted a net profit of 51 million euros, while Commerzbank posted a loss of 2.7 billion euros in the quarter.

Like Commerzbank, Deutsche bank had also implemented a restructuring plan in 2019. This resulted in a total loss of 58 billion euros at the time. This was the biggest loss in the history of the banking group.

About the Commerzbank Group

Founded in 1870, Commerzbank is a German banking company. It is recognised as the second largest bank in Germany. The state is the company's largest shareholder with a share of over 15%. The group has an extensive network of almost 800 branches.

In order to respond effectively to the needs of its corporate clients, the group is present in over 40 countries. It also has more than 48,000 employees worldwide. In its international business, the bank supports customers with a business connection to Germany and companies in promising sectors.

Trade the Commerzbank share!
77% of retail CFD accounts lose money. You should consider whether you can afford to take the high risk of losing your money. This is an advert for trading CFDs on Plus500