Unlike many other companies, the Carrefour group had an excellent year in 2020. Its business grew strongly during the year. This is illustrated in particular by the strong sales momentum. This has continued in 2021. Also, the French food retail giant has recorded a record sales performance in 2021. Find out the key points to remember from the group's annual results.

Trade the Carrefour share!
79% of retail CFD accounts lose money. You should consider whether you can afford to take the high risk of losing your money. This is an advert for trading CFDs on eToro 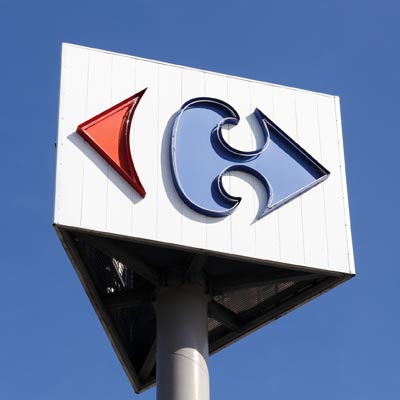 In 2021, the Carrefour group recorded its best sales performance in 21 years. Indeed, over the whole of the twelve months of this year, its turnover (TCC) reached 81.2 billion euros compared to 78.6 billion euros in 2020. 78.6 billion in 2020. It reported an increase of 72.3% on a comparable basis. This increase was driven by improved profitability in Spain and Italy.

The Carrefour group's sales excluding taxes for the full twelve months of 2021 are 72.9 billion euros, up 3.11% year-on-year. The results posted for this pre-tax turnover in 2020 were 70.7 billion euros.

In these countries, the company's sales increased strongly during 2021. In fact, consumers have chosen the option of eating (away from home) in the evenings. This has encouraged the growth of supermarkets in a context of easing health constraints.

Performance of other financial indicators in 2021

During the 2021 financial year, Carrefour recorded a strong increase in cash generation. At the end of December, the group posted a net free cash flow of €1.228 billion, up €172 million on the previous year when it reported €1.056 billion.

This solid performance was driven by the good commercial dynamics, combined with the company's financial rigour. Adjusted net free cash flow (from exceptional items and discontinued operations) amounted to €1.514 billion in 2020, compared to €1.594 billion a year earlier. 79 million compared to 2020.

For more than two years, Carrefour has shown great discipline in its finances. This has enabled it to strengthen its balance sheet and liquidity in the course of the 2021 financial year. In fact, the company has one of the strongest balance sheets in the industry. This represents a major asset for the company in the current difficult context.

This is a major asset for the company in the current challenging environment, which is marked in particular by the recovery from the coronavirus health crisis and by the rapid changes in food distribution. In addition, the strengthening of the group's liquidity during 2021 was supported by the bond issue carried out in April 2020. 1 billion with a maturity date of December 2027.

This transaction was a great success at the time. This illustrates the great confidence of investors in the Carrefour signature. In addition, in April 2020, the company repaid a bond loan estimated at 802 million euros.

Dividend and market capitalisation of Carrefour in 2021

The Carrefour group is one of the companies that distribute a coupon to shareholders. For about ten years, it has chosen the scrip dividend option. However, the company has decided to standardize its dividend policy. From now on, the dividend will be paid in full in cash.

Thus, at the General Meeting held on 16 May 2022, the company's Board of Directors decided to pay a dividend of EUR 0.52 per share for the financial year 2021. The distribution took place on 26 May 2022. Furthermore, Carrefour is one of the most popular stocks on the stock market for investors.

The company is listed on the Paris Stock Exchange. It is one of the companies that make up the CAC 40 stock market index. As of 2020 (end of December), its market capitalization was estimated at approximately 11.5 billion euros.

About the Carrefour Group

Founded in 1958, Carrefour is a French company specialising in mass retailing. The group is recognised as the number one in this sector in Europe. It is the second largest retailer in the world. In 1963, the company developed the hypermarket concept.

The company's main mission is to offer its customers quality services, products and food accessible to all. In addition, the group operates in more than 30 countries. It has a workforce of more than 321,000 employees worldwide.