Founded in 1857, Banco Santander is the leading bank in Spain. It is also one of the largest banking groups in Europe. In 2020, the group's business was heavily impacted by the Covid-19 health crisis. The pandemic affected the entire banking sector during the year. Find out more about the company's performance in 2020 in the following lines.

Trade Santander shares!
72% of retail investor accounts lose money when trading CFDs with this provider. You should consider whether you understand how CFDs work, and whether you can afford to take the high risk of losing your money. This is an advert for trading CFDs on Plus500 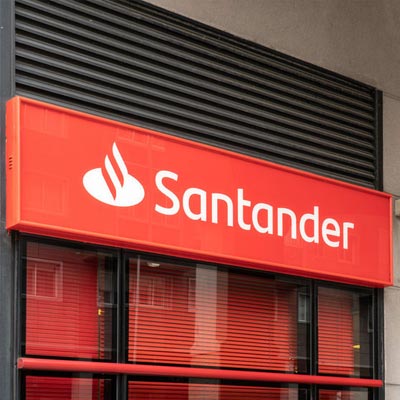 At the start of the 2020 financial year, the Banco Santander banking group saw its activity strongly affected by the Covid-19 pandemic. During the first quarter, the bank's results were affected by extraordinary provisions relating to the health crisis. In the first three months of 2020, the company posted a net profit of 331 million euros.

This was 82% lower than in the same period a year earlier. From January to March 2020, the Spanish banking giant set aside 1.6 billion euros in provisions to deal with loan defaults that could be caused by the economic crisis linked to the coronavirus epidemic.

Moreover, in the second quarter of 2020, the group's activity took place in the middle of the first wave (in Europe) of the epidemic. This plunged the company's accounts into the red. In fact, for the whole of this quarter, it posted a net loss of 11.13 billion euros, a first in the company's history.

After a heavy loss in the previous quarter, Banco Santander returned to profit in Q3 2020. The bank benefited from the recovery of its activity. The latter reached pre-pandemic levels. During this period, European banking groups continued to be penalised by historically low interest rates.

At the same time, they are forced to continue to reduce costs due to the economic downturn caused by the Covid-19 pandemic. For the whole of Q3-2020, the company saw its net profit (group share) triple on a reported basis. However, its underlying net profit fell by 18% to EUR 1.75 billion.

This decline was mainly due to provisions related to the health crisis. The market was expecting an operating result of 1.06 billion euros for the quarter under review. At that time, other reports revealed that the group was planning to cut almost 3,000 jobs, or about 11% of its workforce in Spain.

Indeed, the company was planning these job cuts due to the adverse effects of the epidemic, but also due to the transition to digital platforms. In addition, in the fourth quarter of 2020, the bank saw its net profit fall by 90% to 277 million euros.

This was below the market's expectations of an average of EUR 526 million. In Q4-2020, net interest income (NII) amounted to EUR 8.02 billion. 8.02 billion. It fell by 9.3% year-on-year. In fact, this indicator is used to determine the difference between income from loans and the cost of deposits.

Spanish banking giant Banco Santander ended the year 2020 with huge losses. For the year as a whole, the group posted a net loss of €8.7 billion. This was mainly due to provisions and asset write-downs caused by the Coronavirus epidemic.

This is a sharp decline recorded by the bank. However, this result was in line with market estimates, which were expecting a net loss of 8.65 billion euros for the year under review.

In the year 2020, the company set aside more than 12 billion euros in provisions to cover the risk of unpaid loans. This amount has increased by 47% compared to the previous year. It should enable Banco Santander to cover the non-repayment of loans granted to its customers (individuals and companies). This was due to the pandemic that caused a drop in economic activity worldwide in 2020.

In the second half of this year, the group saw signs of recovery. Indeed, the restrictive measures to counter the coronavirus epidemic were relaxed compared to their level in the spring.

Over the twelve months of 2020, Spain's leading bank recorded a net banking income, equivalent to turnover, of 31.9 billion euros. It fell by 9.3% compared to its level in the previous year.

Faced with the dire economic outlook for the world economy, Banco Santander has been forced to adopt significant measures. One of these is the downgrading of the value of several of the company's subsidiaries, particularly in the UK.

The group has been operating in the UK since the 2000s by buying up several small banks at a significant cost. However, the profit targets envisaged by the company for these acquisitions have not been met.

The profits expected from these takeovers have been affected by the health crisis. Indeed, the pandemic has negatively impacted the accounts to the tune of more than 10 billion euros. In addition, the group estimated that the economic recovery should be effective in 2021. This should be helped by the success of the vaccination campaign against the coronavirus.

The Banco Santander group is one of the major banks in Europe that pays a dividend to its shareholders. This coupon has been paid without interruption for 21 years. For the financial year 2020, the company's Board of Directors has decided to distribute a cash dividend of 2.75 euro cents per share.

Santander shares are also very popular on the stock markets. It is listed on the Madrid Stock Exchange. The company is also included in the IBEX 35 national stock market index. In 2020, its market capitalisation was estimated at over 50 billion euros.

Trade Santander shares!
72% of retail investor accounts lose money when trading CFDs with this provider. You should consider whether you understand how CFDs work, and whether you can afford to take the high risk of losing your money. This is an advert for trading CFDs on Plus500