Arkema is a French company operating in the chemical industry. It is particularly specialised in speciality chemicals and performance materials. On a global level, the group is a major player in specialty chemicals. It is also the leader in this sector in France. In 2020, its activity was impacted by the Covid-19 health crisis. This logically penalised its results for the year. Details in the lines to follow.

Trade the Arkema share!
77% of retail CFD accounts lose money. You should consider whether you can afford to take the high risk of losing your money. This is an advert for trading CFDs on Plus500 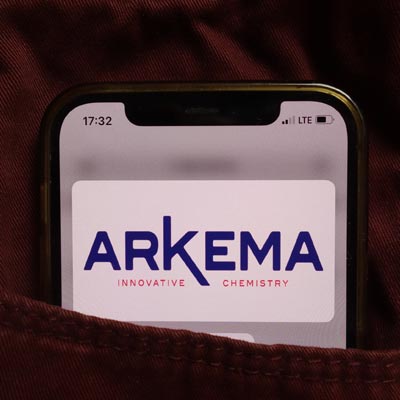 For the full twelve months of fiscal year 2020, Arkema achieved annual sales of €7.9 billion. It reported a year-on-year decline of around 10%. At constant exchange rates, it was down 8.1% year-on-year. This decline reflects in particular the impact of the health crisis on global demand.

On the other hand, there was a clear rebound in sales in the fourth quarter. In this period alone, the company's revenues amounted to 1.985 billion euros. 1.985 billion. Sales volumes also increased by 5.2% in the last quarter of the year. This performance reflects the good momentum in the group's various markets.

For the year 2020, the company posted a net profit of 332 million euros, down by almost 40% compared to the previous year. Net current profit (excluding exceptional items) amounted to 391 million euros for the year. It fell by 37% over one year.

As for the group's Ebitda, it stood at 1.2 billion euros in 2020. This is about 19% lower than in 2019. The result is an Ebitda margin of 15%, down 1.7 points. This underperformance is due in particular to an unfavourable exchange rate effect, the decline in volumes and the fall in prices in intermediate products.

At the end of December 2020, the company posted a free cash flow of 651 million euros, compared to the previous year's level. It illustrates in particular the rigorous control of industrial investments and the good management of working capital requirements.

On the other hand, the group's net debt was significantly reduced to €1.91 billion (taking into account hybrid bonds), compared to €2.331 billion at the end of December 2019.

Quarterly balance sheet in the first quarter of 2021

In the first quarter of 2021, Arkema took advantage of the marked improvement noted in the market to post solid results for the period. Between January and March, the French chemical company recorded sales of €2.23 billion. 2.23 billion, up 12.7% (on a like-for-like basis) over the year.

This fine performance was driven in particular by the strong increase (7.7%) in volumes, continuing the recovery noted in the last quarter of the previous year. It was also driven by good momentum in most of the company's end markets.

During the quarter, the company kept its net debt under control. Net debt came to EUR 2.0 billion (including EUR 700 million of hybrid bonds).

Update on the Group's activities in the second quarter 2021

In the second quarter 2021, Arkema recorded strong growth in its financial results. Over the whole period, its sales reached €2.4 billion, up 34.6% (at constant scope and exchange rates) year-on-year. Compared to 2019, it is up by 12.1%.

This strong performance was partly driven by strong volume growth. They increased by 17.1% compared to Q2-2020. Between April and June, the French chemical company saw its net current result multiply by almost 3 to reach 267 million euros (or 3.50 euros per share).

For its part, the group's Ebitda amounted to 478 million euros in Q2-2021. This is an increase of 67.1% compared to the same period last year. At the end of this quarter, the company's net debt is estimated at 1.28 billion euros (taking into account 700 million of hybrid bonds).

Arkema's results in the third quarter of 2021

The Arkema group recorded a good financial performance in the third quarter of 2021. Over this period, the French specialty chemicals giant achieved sales of €2.4 billion. This represents an increase of 25.6% (on a reported basis) over one year. On a like-for-like basis, sales rose by 29.1% compared to Q3-2020.

About Arkema's dividend and market capitalization

Arkema is one of the French companies that pays a dividend to its shareholders at the end of each fiscal year. The dividend paid for the year 2020 was €2.5 per share. This coupon was distributed on May 28, 2021.

In addition, Arkema's shares are among those that are closely followed by investors or traders on the financial markets. Indeed, the company is listed on the Paris Stock Exchange on the Euronext market. As of January 2022, its market capitalisation was estimated at more than 9 billion euros.

Trade the Arkema share!
77% of retail CFD accounts lose money. You should consider whether you can afford to take the high risk of losing your money. This is an advert for trading CFDs on Plus500