It is interesting to use so-called interest rates when trading certain currency pairs such as the USD/JPY cross. To find out more about the advantages of these rates, we provide you with some additional information and practical tips on how to use them to best advantage in your analysis.

As both currencies benefit from tight monetary policies, it is essential to keep abreast of all releases from the US Federal Reserve for the dollar and the Central Bank of Japan for the yen.

Indeed, it is not uncommon for these two organisations to communicate in advance their future interventions on the foreign exchange market as well as their future prospects.

On the other hand, the most interesting figures for Japan are those for industrial production and exports. Foreign markets are in fact the main source of profits for the country, which tends to maintain a high level of competitiveness. Beware, therefore, of a drop in this indicator which could lead to action aimed at devaluing the Yen, such as a massive sale of foreign currency by the Central Bank. Conversely, good results in this sector often contribute to the appreciation of the Japanese currency.

On the Dollar side, the most impacting figures are those linked to employment and real estate, which have a very strong influence on the greenback's prices. The better these sectors are doing, the more the dollar appreciates. However, as the country's monetary policy is subject to controversy, it is essential to be on the lookout for important publications in order to anticipate speculations of psychological effects. 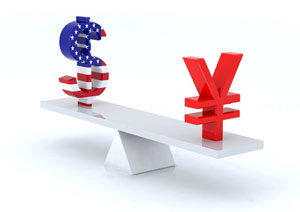 Characteristics and specificities of the US dollar or USD :

In order to trade the USD/JPY currency pair more effectively, it is of course necessary to be familiar with the specifics of the two currencies that make up the pair. Let's start here with the US dollar or USD whose evolution is most often the result of a known safe haven status but also of the level of US growth or the decisions and policies of the Fed.

The safe-haven value of the US dollar is due to the fact that this currency has managed to emerge from various economic and financial crises over time. Of course, the fact that the United States is still often regarded as the world's leading economic power is not without reason either. However, the dollar's role as a safe haven has become less and less asserted in recent years, although it remains to be taken into consideration.

Thus, when the market experiences periods of significant risk aversion, the US dollar tends to rise, as was the case during the 2007/2008 crisis.

Finally, the Federal Reserve or Fed and its various interventions and decisions also have an undeniable weight on the price of this value and you must therefore take into account the various measures taken by this body, notably to revive the American economy with the reductions or increases in key rates or even the Quantitative Easing or QE programmes which act by creating high inflation, which is of course not without consequences on the value of the American dollar.

Characteristics and specificities of the Japanese Yen :

Let's now move on to the second currency of this cross, the Yen, and the elements that most influence its value.

The first thing to know about the Yen is that this currency has a safe-haven status in that it loses value when the world market is growing and gains points in a crisis. The fact that the Yen is used for Carry Trade strategies is another element that makes it a safe haven in the markets.

Indeed, since the beginning of the 21st century, the BoJ, or Central Bank of Japan, has been pursuing a policy of key rates at 0% in order to avoid deflation and excessively low growth. This decision of course has a direct influence on the value of the Yen, since this currency can then be used to finance the purchase of other currencies with higher interest rates. Remember that when you sell a currency on the Forex market, you pay this interest rate and, in the opposite situation, when you buy a currency, you receive this interest rate. Therefore the USD/JPY has long been influenced by the Carry Trade strategy used by many investors. But since 2009, this strategy has been used less and less in view of the general fall in interest rates of other central banks.

As the value of the Yen has little exposure to the economic health of that country, it is therefore primarily the safe-haven status of that currency that you should consider when taking positions in the USD/JPY. In fact, we note that Japan has, in the past, gone through many economic crises from which it has emerged without any problems and that the Yen remains a currency widely used in international trade. But it is also above all Japan's debt that makes the Yen a refuge currency par excellence. In fact, despite the fact that Japan has the largest debt in the world, with a level of debt of over 225% of GDP, it holds a large part of its own debt, over 90%. Japan does not therefore suffer from the vagaries of the financial market for its refinancing, even though the debt of other countries in the world is literally skyrocketing, particularly in the developed countries. This can easily be seen on historical stock market graphs with the subprime crisis of 2008 and the financial crisis that led to massive purchases of Yen. This scenario was then repeated in 2011 with the debt crisis. However, as we quickly said above, when the world economy is doing well, the Yen tends to lose value. It is therefore fairly easy to anticipate future changes in the USD/JPY rate based on the level of global growth and possible economic and financial crises.

Finally and unlike most other currencies, the Yen is not really influenced by the Japanese economy.  Indeed, the trade balance of this country, which is both a major exporter and a major importer, shows a jagged evolution, sometimes positive and sometimes negative, depending on the level of exports and imports. However, there is a correlation between the value of the Yen and the Japanese economy, since it is the competitiveness of this currency against other world currencies that will make imports or exports more or less advantageous and make the country more or less competitive.

As you will have understood, the Japanese economy is not a prime influencing factor if you wish to invest in this currency pair. Furthermore, it is noticeable that the growth of the Japanese economy has remained relatively weak over the last few decades due to persistent deflation. The Bank of Japan's efforts to reverse this trend will be monitored, in particular through quantitative easing, which, however, has so far not yielded any lasting concrete results.

From the late 1970s to the mid-1980s, the Yen lost a lot of value against its American competitor. At that time, the cross country was worth 239. It wasn't until 1985 and the Plaza agreements, which required the American government to stop lowering the value of the dollar against other currencies, that the yen recovered on the foreign exchange market. We then witnessed a sharp drop in the cross whose value finally reached the 80 threshold ten years later in 1995.

It is then the turn of the Yen to depreciate again because of the financial crisis that affected the country until 2002 and linked to the melting of Japanese assets abroad. This will be followed by a slight recovery for 3 years until 2005 before a further depreciation of the Yen, with the USD/JPY cross reaching 125 pips in 2007.

Today, we are witnessing a new appreciation of the Yen, although the Japanese government is determined to curb the rise of its national currency at all costs in order to maintain the country's competitiveness.

As is the case for all other currencies, the interest rate for the US dollar and the Yen is set by the major central banks of these two countries. Indeed, as far as the greenback is concerned, it is the US Federal Reserve or Fed that is in charge of determining the rate. For the Yen, it is the Bank of Japan which updates the interest rate of this currency.

Since these interest rates may be revised regularly by these bodies, it is important to consult an economic calendar on a regular basis to find out about new rates.

The level of interest rates for each currency in a particular cross is of interest because they are included in the gains or losses you make when you buy or sell that cross.

Concretely, when a currency has a rising interest rate, this will increase the capital gain on its resale, just as a currency with a falling rate will be more interesting to buy. But it is important for your strategies to know both the evolution of the dollar and the yen.

When is the best time to trade the USD/JPY cross?

Trading the USD/JPY can be done at any time but it is best to trade this currency pair at certain times, such as from 3:30 pm to 6:30 pm which is the time of the opening of stock trading in the US and Europe. From 10pm to 4am is also a good time to trade this currency pair as this is when the Asian stock markets are at their strongest, including the Japanese stock market.

Which indicators should be used to analyse the USD/JPY?

In order to make a good analysis of the USD/JPY currency pair, it is of course necessary to follow all the economic publications concerning the American and Japanese economies. This ranges from political decisions to the economic growth of these two countries and of course the major decisions of the central banks of these two zones, namely the Fed and the Bank of Japan.

How to invest in the USD/JPY online?

To invest in the price of this currency pair and therefore speculate on the exchange rate between the US dollar and the Japanese yen, it is necessary to use a Forex broker. This will allow you to bet on the rise or fall of this exchange rate in order to try to gain the difference in price between the opening and closing of your position.