​​​​​Among the currency pairs on which it is possible to invest in the foreign exchange market, there is of course the EUR/CHF, which is the parity between the euro and the Swiss franc. In this article, we will therefore take a closer look at this cross and especially at how it is possible to study the price according to the indicators that are most likely to influence it. We will also explain the technical analysis on Forex that you should of course also applied to the study of the price of this currency pair. But let's start by presenting the Euro / Swiss Franc currency pair in more detail.

The monetary policies of the European Central Bank or the Swiss National Bank and their differences are of course one of the most influential elements in the development of the exchange rate of these two currencies against each other.

Another important thing to watch out for if you are trading the EUR/CHF is the market's concerns regarding the future of the Eurozone and the European Union. Therefore, one will follow all the news regarding the economic policy and growth of these economic zones.

The Swiss Franc is strongly influenced by the relationship between Switzerland and the European Union, which sometimes leads to high volatility in this currency cross.

Finally, the macroeconomic figures regularly published by these two currency areas can also help to define a medium and long-term trend. 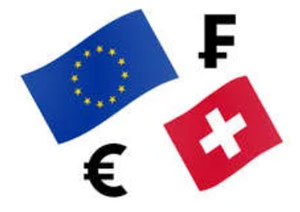 What is the EUR/CHF currency pair?

For example, if on the foreign exchange market the EUR/CHF rate is 1.1040, this means that the value of one euro in Swiss francs is 1.1040 Swiss francs. This is the euro/Swiss franc conversion rate at a given moment. Of course, the EUR/CHF exchange rate is constantly changing according to supply and demand in the currency market, also known as Forex. Below we will look at the factors that can influence this supply and demand.

As for the characteristics of this currency pair, it is well known that the EUR/CHF is not one of the major currency pairs in Forex. However, this minor currency pair attracts many investors and allows for speculation on the economy of the Eurozone and the Swiss market from the Forex.

Like all currency pairs in the foreign exchange market, the Euro/Swiss Franc is quoted during the opening hours of the corresponding markets, i.e. from 9am to 12pm and from 3:30pm to 5:30pm. The volatility of this currency pair varies, however, depending on the time of day and certain market conditions. In particular, there is a high level of activity in this currency pair during the hours immediately following the opening of the European stock market sessions with high trading volumes in both the euro and the Swiss franc.

The second period of the day that shows high volatility is the one between 3:30 and 5:30 p.m. because it is the last hours of the European session but also the first hours of the opening of the U.S. stock market. As European and American investors are present on the market simultaneously, trading volumes are high.

Of course, if you want to invest in the EUR/CHF currency pair, you can also do so outside of these hours. As we will see below, the volatility of this cross can also be influenced by certain events that Forex traders follow from the economic calendar.

How do I perform a technical analysis of the EUR/CHF rate?

Among the two major types of analysis that are important to perform when studying trends in the EUR/CHF is, of course, technical analysis. This analysis requires the use of the Forex charts of this currency pair and makes use of some major technical indicators.

Among the most frequently used indicators to study the EUR/CHF, we find for example the moving averages or the Fractal indicator.

The Fractal indicator is a more recent indicator that was created by Bill Williams and aims to identify short-term support and resistance levels.

However, we would like to point out that technical analysis is not an exact science. Although it is based on mathematical analysis and statistical calculations, it does not in any way allow us to know with certainty what the trend of the euro / Swiss franc cross will be. The foreign exchange market is indeed an unpredictable market, just like other speculative financial markets, and the risks of capital loss are therefore significant.

What events and news have an impact on the EUR/CHF?

In addition to technical analysis, you should also perform a precise fundamental analysis of the EUR/CHF currency pair in order to obtain signals on this value. This technical analysis is based, as we have seen in this article, on the study not of charts but of external events and publications that may influence the supply and demand of the euro or Swiss franc.

However, the two markets concerned by this currency pair, the European market and the Swiss market, do not lack news and economic or political publications. We will of course be more specifically interested in certain data directly related to these two currencies, i.e. data from the central banks of these two zones or certain economic publications reporting on the activity and growth of these zones.

Among the publications to be followed in this analysis, we note in particular the economic announcements made by the European Central Bank and especially the announcements related to the rates set by the ECB. These announcements are indeed particularly followed by Forex investors and therefore often cause volatile movements and large trading volumes. These announcements are published once a month, at the beginning of the month, on Thursdays at around 1:45 pm. You can find out what these decisions are by checking an online economic calendar which will show you both the forecast and the actual figures once they are released. But these announcements are not the only ones to follow and, apart from the monthly publications, the ECB holds regular meetings which are systematically followed by press conferences. Again, ECB press conferences often provide interesting information for traders as they report on the monetary policy and therefore the effect the central bank is seeking to have on the evolution of the euro against other currencies. Let's recall, for example, the important announcement effect of the European Central Bank's decision to lower its key rate to 0% for the first time in its history in March 2016. This decision was made to push banks to circulate money in the Eurozone economy.

In the same way, important meetings and decisions taken by the Swiss central bank will also be followed.

To conclude this article, we must remind you of the risks incurred by traders who invest online in Forex and therefore in the currency pair EUR/CHF but also in all other currency pairs in the foreign exchange market.

Indeed, trading is a risky activity that can lead to the loss of your capital. Remember that the Forex market is one of the most volatile markets today, which means that movements can be strong and fast and that a solid knowledge and reactivity are required to be able to react in time and in the best way to these fluctuations.

Another important risk in Forex trading is the use of leverage offered by many brokers. Although this leverage is now regulated by the AMF and is therefore limited, it is strongly discouraged because it can significantly increase your losses and thus melt your capital very quickly in case of poor anticipation of trends.

In summary, trading the foreign exchange market and investing in the EUR/CHF currency pair is not an activity that is suitable for beginners. Only traders with very good knowledge and experience of the foreign exchange market and trading can take advantage of this parity to take optimal strategic and speculative positions and be able to manage the risks involved with this practice.

What influences the EUR/CHF rate?

The EUR/CHF exchange rate is determined solely by supply and demand on the foreign exchange market. However, it is also interesting to know that several external factors will influence this supply and demand such as the decisions of the central banks and the key rates or the economic and financial exchanges between these two economic zones, i.e. between Switzerland and the euro zone.

How often does the EUR/CHF exchange rate change?

It is important to understand that the EUR/CHF exchange rate moves continuously in the market. When you look at the charts of this exchange rate, you will see a change in the rate every second during the opening hours of this market. This is of course also the case for all other Forex currencies and you should therefore take this rapid change into account in your investment strategies.

Are the margins of financial intermediaries the same on EUR/CHF?

The exchange rate offered by financial intermediaries on the EUR/CHF currency pair varies greatly depending on the margin that will be applied by each of them. This margin will serve as a remuneration to this intermediary and you must take it into account before choosing the broker through which you will speculate on this cross. In the case of online Forex trading, this margin is expressed by the spread.