Airbus is the European leader in the aerospace and defence industry. Globally, the group ranks second in this sector, just behind Boeing. In 2021, the aircraft manufacturer's business has grown nicely, after a difficult year in 2020 due to the Covid-19 pandemic. As a result, it is posting solid results for 2021. Discover them in this article.

Trade in Airbus shares!
79% of retail CFD accounts lose money. You should consider whether you can afford to take the high risk of losing your money. This is an advert for trading CFDs on eToro 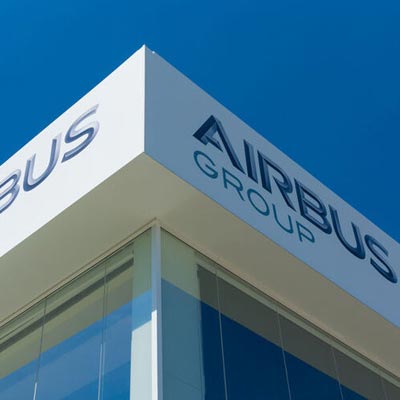 For the full twelve months of fiscal year 2021, Airbus achieved consolidated revenues of €52.1 billion, compared to €49.9 billion in fiscal year 2020. This represents an increase of 4% year-on-year. This growth reflects the increase in commercial aircraft deliveries.

This was partly offset by less favourable exchange rates. For the year 2021, the group has delivered a total of 611 commercial aircraft, compared to 566 in 2020. Airbus Helicopters delivered 338 units in the year under review, compared with 300 units a year earlier.

Its turnover grew by 4% in 2021 compared to 2020. This strong performance was driven by increased service activities and growth in deliveries.

In contrast, Airbus Defence and Space saw its revenue decline by 2% for the full year 2021. This decline was mainly due to Military Aircraft. However, it was partially offset by Space Systems. In 2021, the number of A400M military transport aircraft delivered reached 8.

Adjusted Ebit from Airbus' commercial aircraft business increased to € 3,570 million in 2021 from € 618 million in the previous year.

For the year 2021, Airbus Helicopters recorded an adjusted Ebit of € 535 million, compared to € 471 million a year earlier. This increase reflects the good momentum in services, programme execution and cost control.

Airbus Defence and Space achieved an adjusted Ebit of €696 million in 2020. A year earlier, it was estimated at €660 million. This growth is mainly due to the measures implemented to reduce costs.

Consolidated self-financing R&D expenditure is estimated at €2.746 billion in 2021, compared to €2.858 billion a year earlier.

About the order book

373 billion a year earlier. Furthermore, the increase in the value of the backlog mainly reflects the strengthening of the US dollar.

Performance of other financial indicators in 2021

This result illustrates in particular an impact of -246 million euros relating to net interest. It is also linked to the net revaluation of certain financial and capital investments.

In addition, the company recorded consolidated earnings per share (EPS) of 5.36 euros in fiscal year 2021, compared to a consolidated loss per share of -1.45 euros a year earlier.

At 31 December 2021, consolidated free cash flow (before mergers and acquisitions and customer financing) was 3.515 billion euros, compared to -6.93 billion euros at the same date last year. During the year, Airbus made significant efforts to preserve cash and reduce working capital.

This was mainly supported by inventory improvements. At the end of December 2021, the consolidated free cash flow amounts to € 3.511 billion, compared to € -7.36 billion a year earlier.

At the end of 2021, the aircraft manufacturer has a very solid cash position. It is estimated at 28.7 billion euros.

The Airbus Group has resumed the payment of dividends after having interrupted it last year due to the global economic context linked to the Covid-19 health crisis. At the 2022 Annual General Meeting, the Board of Directors proposed to distribute a dividend of €1.50 per share for the financial year 2021. The payment date was set for 21 April 2022.

In addition, the company is present in the equity markets. The Airbus share is listed on the Paris Stock Exchange. It is part of the French stock market index CAC 40. As of May 2022, the company's market capitalisation is estimated at more than 80 billion euros.